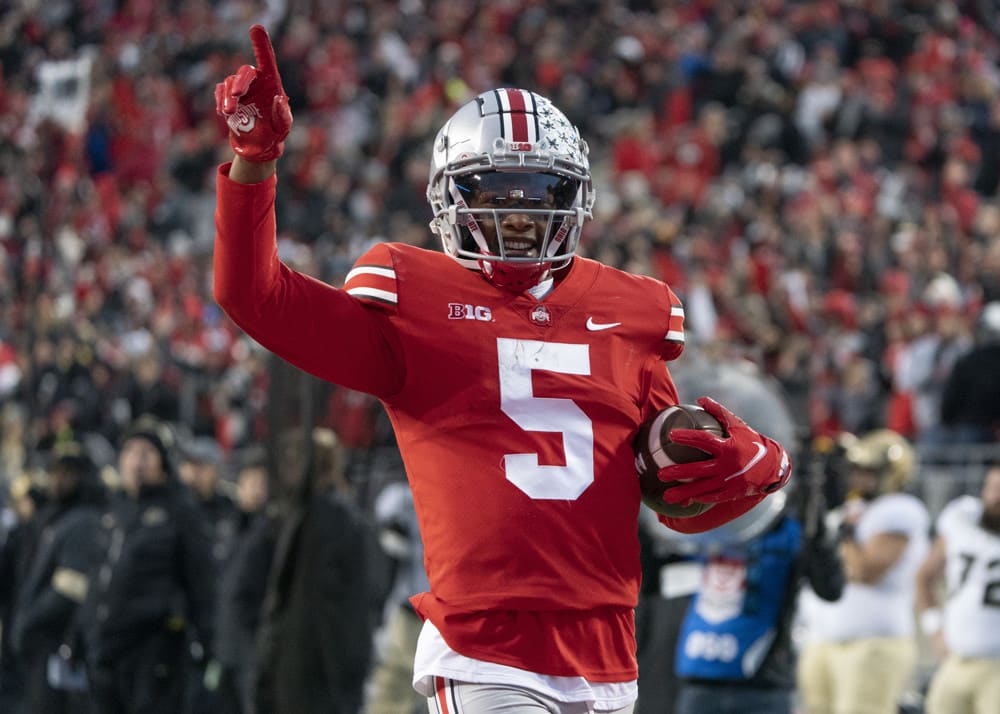 Next up in our series of NFL Draft rankings are the Wide Receivers. This is perhaps one of the deepest positions in the entire draft. I could legitimately see 5 or more of these guys going in the first round. In today’s pass-happy NFL wide receivers are key and many teams will be looking

In a draft that’s not particularly stellar at the quarterback position, I would expect a lot of teams to try to add a WR1 and roll the dice one last time with their current QB. With that said, let’s dive into this loaded WR class and break down some of the stars of tomorrow.

With the aforementioned depth of this class it was hard to pinpoint a number one, but at the end of the day it was hard to not give the nod to Garrett Wilson. Last season as a sophomore Wilson broke onto the scene catching 43 passes for 723 yards and 6 touchdowns, in a shortened (8 game) season. Additionally Wilson followed up a stellar sophomore outing with some crazy numbers this year, 70 receptions for 1058 yards and 12 touchdowns in 11 games.  These numbers put Wilson in the top 30 for yards and top 7 in touchdowns.

While tons of receivers can put numbers on the board not many can do what Wilson can do on the field. The first thing to mention about Wilson is his ability to break plays with the ball in his hands. Over his 3 seasons in college his yards per catch average was always over 14 and while he doesn’t have blazing speed, it’s his elusiveness that makes him so dangerous. To me this elusiveness makes me think Wilson would succeed most in a slot role at the next level where teams can get the ball into his hands quickly. Additionally, Wilson is one of the best route runners in this draft when it comes to his quick step and change of direction on routes. These skills should allow Wilson to have a lot of success in the NFL in RPO heavy offenses.

Treylon Burks is a guy who has actually kind of flown under the radar this year despite incredible numbers. He caught 67 passes for 1123 yards in 12 games, while playing in the SEC. Burks is an absolute stud and probably doesn’t get the recognition he deserves because he wasn’t playing for Bama, Georgia, or Ohio State.

From a physical standpoint, Burks is an absolute specimen. While at this point it is all projections, I have seen people saying Burks is likely to clock in somewhere around a 4.3 forty yard dash. Take that with a grain of salt, but not many guys in this league are 6-3 and can run a 4.3 forty yard dash. On top of his speed, Burks’ physicality should make him a fantastic red zone target in the NFL. When mentioning Burks’ hands the fact that he had to have 5XL gloves specially made for him is going to be brought up a lot this April.

If you would’ve asked last season many would’ve had Chris Olave above Wilson, and the argument can still be made. Ohio State has been on a tear of putting out WR talent and it continues here. This season Olave went for 936 yards and 13 touchdowns in 11 games, which is wild that he was averaging almost 1.2 TDs per game. As his numbers prove he’s got a nose for the endzone and always finds a way to break the big play, something every NFL Team could use.

For Olave, if I had to point out his greatest skill it’s his route running. He’s arguably the best in the whole class and can beat teams on the deep, medium and short routes. Like Wilson, Olave makes great cuts and consistently is shaking opposing corners. This ability, coupled with great speed (4.38 forty-yard-dash) allows Olave to create frequent separation and is part of the reason he averaged 15.4 yards per reception in his career at Ohio State.

Jahan Dotson was one of college football’s most electrifying players this season. He scored 13 total touchdowns on 1182 yards, including a 242 yard and 3 touchdown game against Maryland. Dotson managed to break big play after big play this season and found himself rising up draft boards because it.

From a physical perspective, Dotson isn’t the biggest guy on the board but what he lacks in size he makes up for in speed. Dotson has been clocked at a 4.33 forty-yard dash which would make him the 7th fastest WR in the last 5 years. This speed allows for Dotson to break big plays, contributing to the fact that he is 1st in all of college football with 12 twenty-plus-yard TD receptions since 2020. On top of his blazing speed Dotson possesses elite hands that make him a steal in the late first round.

Drake London is another guy on this list who managed to fly under the radar mostly because he plays on the west coast and he also suffered an injury this year. Despite not being highly talked about, London caught 88 passes for 1084 yards and 7 touchdowns in only eight games. These numbers are absolute video game stats and have shot London up draft boards.

This Drake London TD against UCLA will forever be legendary #FightOn ✌️ pic.twitter.com/XKGk3cVtjO

From a physical standpoint, London is the total package. He’s a former USC Basketball player and possesses strong hands and good speed that make him the best contest-catch threat in this draft. London will be a matchup nightmare at the next level as he’ll be sure to cause problems for smaller DBs and linebackers likely won’t be able to run with him. He checks multiple boxes for NFL Teams in need of a vertical and red zone threat. Watch where he lands as he could have the best career among all the wide receivers in the 2022 Draft.

Many people have probably been waiting for Jameson Williams to come up on this list as he was the 5th leading receiver in all of the FBS this year. Him coming in at 6th is by no means a knock on him and more of an indication of this loaded class. This year he caught 15 touchdowns in 13 games and went for 1145 yards. While having a Heisman Trophy-winning QB certainly helps Williams is still a fantastic receiver and will succeed at the next level.

Speaking of the next level I see Williams being most successful in the slot, a spot where he lined up a good bit at Alabama. His quick release and downfield speed make him a very dangerous deep threat but it’s not all he can do. What he lacks in strength and physicality he makes up for by creating separation with shaking defenders using cutbacks and in routes while burning downfield. Bama receivers do well in the NFL and Williams is a value among all the wide receivers in the 2022 Draft.

While John Metchie was outperformed by Williams this year, he is still an insanely good WR. Metchie has gone for 900+ yards in 2 straight years and scored a total of 14 touchdowns in that span. Like Williams, Metchie’s lower ranking is reflective of the talent pool. Additionally, Metchie was in my decision and might be in the draft hindered by the fact that he tore his ACL just two weeks ago.

Like many of the other potential slot guys on this list, Metchie’s best trait is his ability to gain separation. His 4.5 forty-yard dash is nothing crazy but he does possess incredible acceleration, which when paired with his ability to fake DB’s makes him incredibly dangerous. When mentioning his best trait it’s only fair to bring up concerns of drops. Many people attribute this to the fact that he tends to try to catch most passes with his body, so it’s likely something he can fix. If Metchie decides to declare for the draft, look for him to fall a bit due to the injury, potentially to Round 3.

Here is our last under-the-radar player, David Bell. Bell had a fantastic season at Purdue this year catching 93 passes for 1286 and 6 touchdowns in 11 games. If you’re not familiar with Bell I can tell you by April you will be because he’s going to be rising on draft boards in the near future.

Good work on the route stem. I love the spatial manipulation and route deception by selling the slant with his eyes and shoulders.

Good awareness taking his route angle to a fade and tracks the ball over the shoulder #NFLDraft pic.twitter.com/rd6lt4DzsC

From a game standpoint, Bell possesses two main weaknesses being his downfield play and speed. While these are obviously important for an NFL level wide receiver Bell does have the capability to make up for it in his route running. Bell has been talked about as one of the best route runners in the draft and is fantastic at using double moves and stutter steps to shake opposing receivers. While I mentioned a lack of downfield success he does possess great jump ball ability and ball tracking skills which could lead to success in the red zone. Bell could be one of the underrated wide receivers in the 2022 Draft.

George Pickens is a really hard guy to analyze because we haven’t seen on the field too much as of late. Pickens tore his ACL in March and didn’t see the field this year till the end of November. Since then he’s been easing into his role and has only caught 3 passes for 46 yards.

When on the field Pickens uses a combination of speed and agility to stretch the field. In the NFL I’d imagine him playing outside and could see him eventually being a WR1 in the league if he’s able to stay healthy. In addition to Pickens’ ability to be beat you deep he’s also made some spectacular catches in his career. He can go up or out to get the ball and could prove lethal on fade routes in the red zone. We’ll wait to see if Pickens decides to come back to Georgia or enter the draft

Justyn Ross is another name that was very hot a few years ago but then cooled down. While this was clearly not his fault, he still missed the entire 2020 season with a neck and spinal issue.  Upon returning from injury in the 2021 season Ross was able to put up 524 yards and 3 touchdowns in 10 games before injuring his ankle. While Ross’ injury history surely plays a factor it’s hard not to remember his freshman year when he went for 1000 yards and 9 touchdowns.

Injuries aside, let’s dive into Ross’ play on the field. While he isn’t one of the fastest guys available in the draft he is one of the most physical. He’s able to use his size to muscle through contact from DBs and he’s also fantastic at going up for the ball. Like Pickens, I could see Ross becoming a great red zone threat. While it remains unclear if Ross will enter the draft, he could be a steal among day two wide receivers if his injury history causes him to slide down draft boards in 2022.