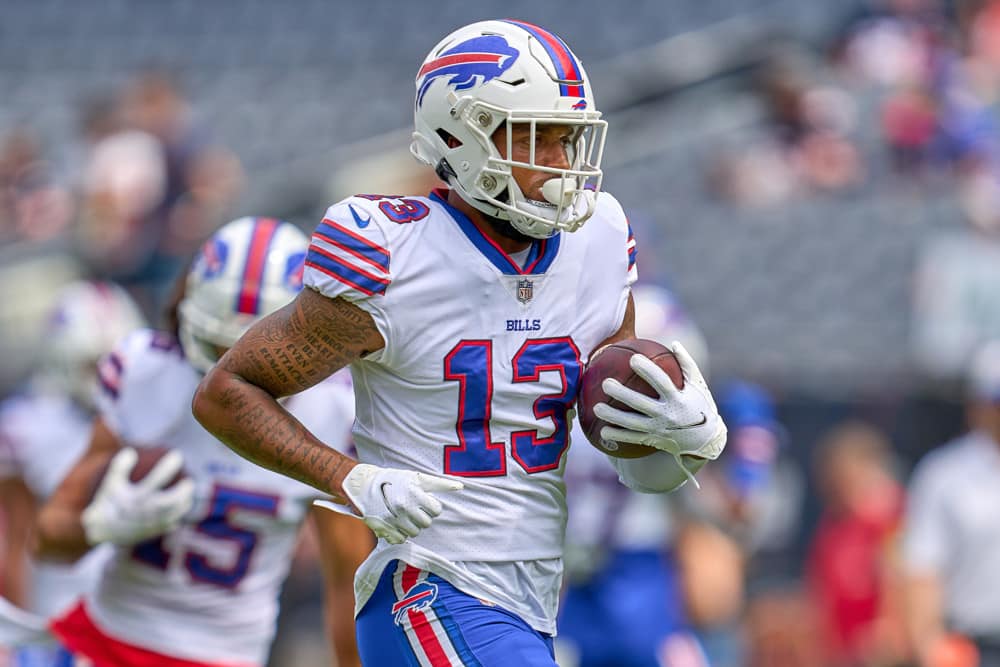 With 15 weeks of the fantasy football season in the books, there is still time to improve your team’s chances at winning a league championship with the following Week 16 Waiver Wire considerations. Whether it involves depth or finding a last-second starter, there are still tons of players that can contribute to your team. As a result, let’s look at some players that you should target for Week 16 of the fantasy football season.

After a couple of lackluster spot starts this season, Jeff Wilson Jr. finally broke out in Week 15 against Atlanta. In that game, he recorded 110 rushing yards and one touchdown. With Elijah Mitchell still dealing with injuries, there is a very good chance that he will be the starting running back next Sunday. Plus, San Francisco is facing off against a Tennessee defense that is allowing 0.9 rushing touchdowns per game which ranks tied for 16th in the league.

With Detroit’s running back group being decimated by injuries and the coronavirus, Craig Reynolds came to the rescue. Reynolds was the featured back in Week 15 and he made the most of the opportunity as he recorded 112 rushing yards. After such a great performance, it is safe to assume that Detroit will continue to ride the hot hand into Week 16. Luckily, Detroit plays against an Atlanta defense that is allowing 117.1 rushing yards per game which ranks 22nd in the league. As a result, expect Reynolds to continue receiving a ton of volume and provide just enough to consider for a Week 16 Waiver Wire addition.

Even though there are more well-known wide receivers on the waiver wire, Amon-Ra St. Brown has been balling out recently. In the last three games, he has recorded 26 catches for 249 receiving yards and two touchdowns. Now, he will get to face off against an Atlanta defense that is allowing 247.5 passing yards per game which ranks 21st in the league. Expect St. Brown to have another productive performance in Week 16.

Injuries are an unfortunate part of the sport but they can lead to some quality opportunities for backups across the league. One example can be found within Denver’s quarterback group. Last week, starting quarterback Teddy Bridgewater suffered a head injury and was carted off the field. As a result, backup quarterback Drew Lock started for the rest of the game as he recorded 88 passing yards and one touchdown. Luckily, In Week 16, Denver faces off against a Las Vegas defense that is allowing 1.8 passing touchdowns per game which ranks tied for 27th in the league. If Bridgewater cannot suit up, then expect Lock to play well and be adequate Week 16 Waiver Wire add.

Anytime you can acquire a wide receiver that plays with Aaron Rodgers, there is upside to be found. Luckily for Marquez Valdes-Scantling, that upside was on full display in Week 15 against Baltimore. In that game, he recorded five receptions for 98 receiving yards and one touchdown. After a performance like that, it is safe to assume that he has reclaimed his WR2 status on the depth chart so he should continue receiving a decent amount of targets in Week 16.

Marquez Valdes-Scantling has officially become the WR we've all been hoping he'd become.

Having a reliable 2nd option is absolutely huge for the #Packers offense.pic.twitter.com/T1FKPeqbs9

Even though Buffalo has a lot of quality options at the wide receiver position, it appears that Gabriel Davis is starting to get a bigger role within this offense. In the last three games, he has recorded 12 receptions for 158 receiving yards and four touchdowns. While the yardage could still improve, there is no denying that Josh Allen has constantly looked for Gabriel Davis in the red zone which is a positive sign moving forward. This Week 16 Waive Wire add offers league winning potential.

After joining Miami’s practice squad in October, expectations were extremely low for Duke Johnson. However, thanks to the coronavirus, he was promoted to the active roster for Week 15. In that game, he recorded 107 rushing yards and two rushing touchdowns. While his role moving forward remains unclear, one has to assume that he will continue to receiving touches after a performance like that. Expect Miami to ride the hot hand in Week 16.