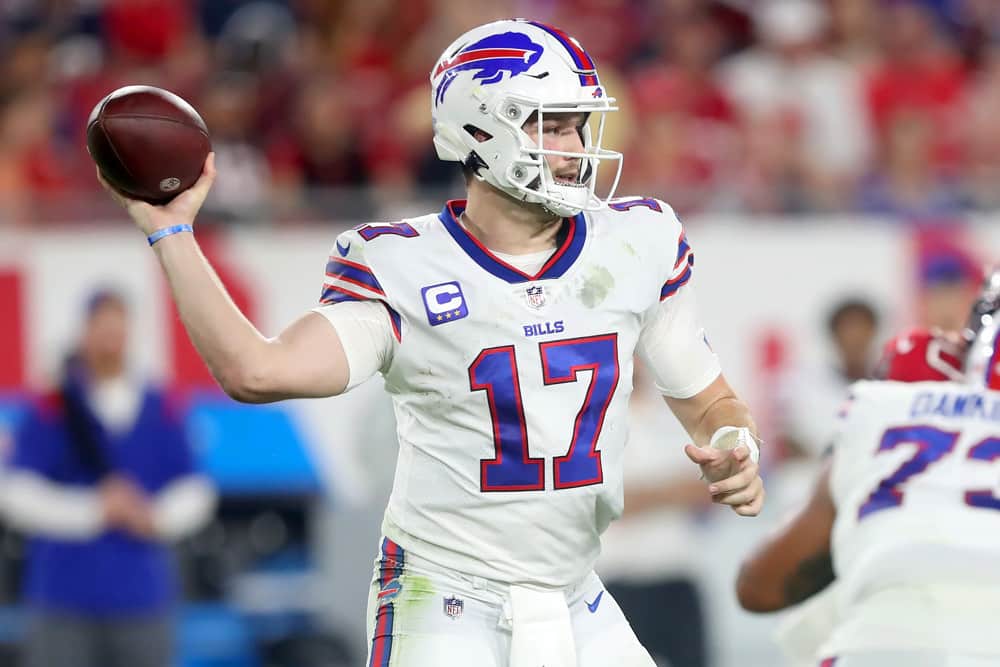 Welcome to the Top 10 DFS stacks article where I will be breaking down the DraftKings main slate to identify my top 10 DFS stacks for Week 15. Stacks in DFS can be defined as; playing two or more players from the same team in a single lineup. Stacking in DFS contests has become the predominant roster construction strategy particularly for GPP tournaments, with a variety of unique and creative ways to build stacks and maximize your scoring upside each week. The most popular stacking options include the skinny stack, the double-stack, the run back stack, and the full-on game stack, and the running back paired with a defense stack.

Matthew Stafford‘s ($7,000) first year in LA has been a Hollywood blockbuster!! He’s currently second to only Tom Brady in touchdown passes with 33 (Brady has 36) and is third in passing yards with 3,898. Stafford’s emergence can be directly attributed to his paring with wide receiver Cooper Kupp ($9,000). The fifth-year pass-catcher leads all NFL receivers with 113 receptions, 1,489 receiving yards, and 12 touchdowns. Kupp leads all NFL players with 27.6 DraftKings points per game. He’s been unstoppable this season and with OBJ’s Week 15 COVID-19 designation, Kupp could see double-digit targets. Wheels up!

Originally, I had planned on running a simple skinny stack with Stafford Kupp, but when Tyler Lockett was ruled OUT for Week 15, having been placed on the NFL’s COVID-19 list, it opened the door for a D.K. Metcalf ($6,200) infusion. Hopefully, Metcalf and Russell Wilson made up after Metcalf’s foursome misstep. Metcalf’s production has dipped the last few weeks, but he has seen 36 targets in his last five games. With Lockett OUT, expect Metcalf to see 10-12 targets in this NFC West divisional matchup. I’m comfortable rolling this stack out in mid-sized GPP field contests.

Aaron Rodgers ($7,500) and Davante Adams ($8,900) are back!! The two have combined for 27 catches the last three weeks, good for 340 receiving yards, and four touchdowns. His 30.3 points per game are the most over the last three weeks. This week Rodgers and the Packers are up against a Baltimore Ravens defense that has given up 2,221 passing yards and 12 touchdowns. According to PFF, Adams has the top-rated cornerback matchup this week against Chris Westry and Anthony Averett. He will be “getting loose” all day long. Devonta Freeman ($5,500) has averaged 13.65 DraftKings points per game since he became the starting running back. RunTheSims.com projects Freeman for 15 points, with a ceiling of 24, making him a cheap game-stack run-back. I’m comfortable rolling this DFS Stack for Week 15 out in large GPP field tournaments.

Dak Prescott ($6,500) and CeeDee Lamb ($7,500) let down a lot of DraftKings users last week, myself included. I can understand the hesitancy to trust the Cowboys given how they played last week against Washington. But DFS stands for “Daily Fantasy Sports” which means “new” lest we color this week’s potential opportunities with last week’s failures. Entrenched as Dak’s favorite target, CeeDee Lamb has flashed his super start upside a few times this season, scoring over 17 points seven times on the season.

The New York Giants are limping to the 2021 finish lineup. They rank 25th against wide receivers, giving up over 36 points per game to the position group. Lamb already roasted the Giants earlier this season, catching four of his six targets for 84 yards and a score. The Cowboys DST ($3,600) has been nasty this year. Led by defensive rookie of the year front runner Micah Parsons and the NFL interception leader Tevon Diggs, these aren’t your father’s Cowboys.

CeeDee Lamb in his last 10 games:

Josh Allen ($8,100) was the DraftKings QB1 last week, exploding for 42 points and outscoring the next closest quarterback by nine points. Mind blown. This week Allen hobbles into Week 15 with an injury distinction after suffering a left-foot sprain against the Buccaneers. Hopefully, this will scare a few folks off of him so we can leverage his lower rostership. Pairing him up with Stefon Diggs ($7,700) and Dawson Knox ($5,100) makes the most sense given the injury news for Emmanuel Sanders and Cole Beasley injury news.

The Bills pass the football 61.43% of the time, good for 10th best in the NFL. Without a consistent rushing game, expect Allen and the Bills to target cornerback C.J. Henderson all day long. Diggs has been averaging 18.6 DraftKings points per game over his last eight games. His 9.6 targets in the last five games mean the opportunities will come, possibly in this DFS Stack for Week 15.

Josh Allen recently saw the play "Hamilton" and said it was just "good." 😐

See why @CDCarter13 is adjusting down on the Bills QB and the entire team as whole. ⬇️ pic.twitter.com/yNfnO2e4lw

George Kittle ($7,500) broke the DraftKings main slate the last two weeks, scoring 79.9 points and averaging 39.85 points per game!! I’ll give you a second to adjust your ranks. Kittle has been completely unstoppable, catching 22 of his 27 targets for 332 yards and three touchdowns. Last week there were those who said that playing Kittle was chasing points, they were wrong, and there’s a good chance they will be wrong again. This week Kittle faces the Atlanta Falcons, who though they aren’t terrible against tight ends, are terrible. Give me all the Kittle.

Running it back with Cordarrelle Patterson ($6,900), who has 19,18, and 21 touches in the last three weeks, provides the most bang for your proverbial buck. He’s been the focal point of the Falcons offense all season, finishing as the Falcon’s top scorer in eight out of 13 games. His 10 total touchdowns lead the team by seven. I’m comfortable playing this DFS Stack for Week 15 in larger GPP field tournaments.

Jalen Hurts  ($6,600) hopes to return to the Philadelphia Eagles’ lineup in Week 15 after missing a game with an injured ankle. Perfect timing for Hurts, as 17 Washington Football players, including 6 linemen, are currently on the NFL’s COVID-19 list. Hurts should be able to move the ball this week against the depleted WFT. Expect him to look for his tight Dallas Goedert ($5,300), who was on fire last week, catching all six of his targets for 105 receiving yards and two touchdowns.

The WFT’s offense is also on hard times, with tight end Logan Thomas on IR, and wide receiver Terry McLaurin and running back J.D. McKissic in the NFL’s concussion protocol. Antonio Gibson ($6,000) is the last man standing, and also an excellent run-back option given his use in the passing game the last month and the fact that Washington literary has no one else to turn to.

The Miami Dolphins are missing all of their starting running backs. Jaylen Waddle is on the NFL COVID-19 list. The Dolphins are starting Duke Johnson at running back. Tua Tagovailoa ($5,700) has a 97.4 passer rating since Week 6. He has a 73% completion percentage, 1,730 yards, and 11 touchdowns during that time. Devante Parker is only $4,300. Smash. Mike Gesicki ($5,000) has eight performances of 9 points or more this season. The Jets are the worst. They give up 30.5 points per game, giving up 2.7 more points per game than the 31st ranked defense. Tua and the Dolphins will pass all over them this week. End of analysis.

Kyler Murray ($7,900) and the Cardinals are currently 13 point road favorites against the one-win Detroit Lions. Murray returned to action after being sidelined for over a month with a high-ankle sprain and scored 22 points despite turning the ball over twice. This week he looks to exploit one of the worst teams in the NFL in the Detroit Lions. The Lions have heart, but not a lot of skill on defense, meaning that the Cardinals should be able to score at will this week. Given James Conner‘s ankle injury, I’m leaning towards Chase Edmonds ($5,100), who is set to return this week.

If Conner is active, I’m leaning him over Edmonds, but given that he was spotted in a walking boot leaving the stadium on Sunday, and has yet to practice this week, I doubt he will play. Amon-Ra St. Brown ($5,200) has seen 24 targets the last two weeks and has scored 40.1 points, averaging 20.5 points per game. With Swift likely missing another game, I’m comfortable running it back with St. Brown in a DFS Stack for Week 15.

The Denver Broncos rookie running back Javonte Williams has exploded the last three weeks. He’s scored over 74 DraftKings points and is averaging 24.7 points in that span. Williams is averaging 22.3 opportunities per game, including 15 targets in his last three games. Williams also went over 1,000 rushing and receiving yards combined last week. The Bengals give up over 24 points per game to the running back position, except the Broncos, who average 123 yards per game on the ground to exploit this matchup weakness. Running it back with Ja’Marr Chase at $7,100 makes the most sense given his touchdown upside. Chase’s 10 receiving touchdowns are good for third-best in the NFL, tied with perennial touchdown machine Adam Thielen. I’m comfortable running this DFS Stack for Week 15 in mid-range single entry GPP contests.

Ding dong, the witch is dead!! Jacksonville finally fired Urban Meyer, which means the genie’s curse is broken, and James Robinson ($5,400) has been FREED!!! Technically, all the Jags are free, but James Robinson might be the freeeeeeeeeest. The fantasy darling of 2020 was left to rot after Meyer drafted Travis Etienne and signed career plodder, Carlos Hyde “Yo Kids. Hide Yo Wife.” Robinson’s $5,400 is practically steeling this week against the Houston Texans, who rank 27 against running backs, giving up 2,000 total yards and 17 touchdowns. Marvin Jones is a high-upside play, given the Texans’ inability to stop the downfield pass. The Texans’ only reliable player on offense this season has been Brandin Cooks. His team-high 109 targets average out to over eight per game. He’s the only run-back option I feel comfortable trusting in this matchup.