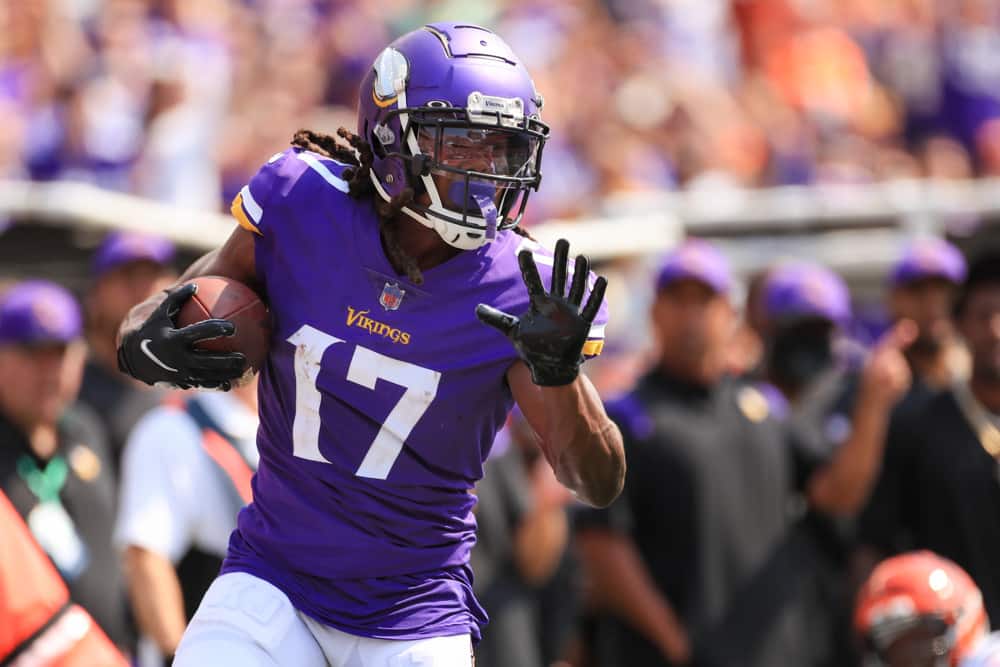 The weather is starting to drop, but the action heats up for this Week 14 NFL Thursday Night Football matchup between the Minnesota Vikings and the Pittsburgh Steelers. Both of these teams are battling for a playoff berth. For the Vikings, they will need to pretty much win out if they hope to reach the postseason. Pittsburgh too will need to press hard over the backstretch of the season to stay in the playoff mix. This sets the stage for what should be a highly contested, hard-fought game.

Injuries play a factor here as they are prone to do this late in the year. The Vikings look to be without one of their major offensive weapons with Dalvin Cook on the mend. On the other side of the ball, the Steelers are hoping their signal-caller can suit up for their playoff push. Keep an eye on these situations as you build your showdown rosters this week.

Fantasy managers have drafted Alexander Mattison as the backup for Dalvin Cook for the last three seasons. By and large, the former Boise St. running back has fulfilled that role and not much more. That said, when he is called upon to fill the starting role, he has proven to be up to the task. In the three games this season in which Cook has not played, Mattison has registered 73 carries for 315 yards. He has also caught 16 of his 17 targets for 133 yards. Last week, he scored his second rushing touchdown of the season against the Lions. It’s clear that Minnesota’s game plan does not change regardless of who lines up in the backfield. This simple fact will continue to make Mattison a must-play on any slate, especially this one.

This week, the Vikings will face off against a Steelers defense that has been gouged by opposing running backs over the last four weeks. Two weeks ago, Joe Mixon raged for 165 yards and two touchdowns against them. Two weeks before that, D’Andre Swift broke loose for 130 yards. In this time period, Pittsburgh has surrendered seven total touchdowns to the position. All told, the black and gold find themselves among the bottom of the league in terms of fantasy points allowed to running backs over that span. They will be hard-pressed to slow down the likes of Mattison this week. As such, he makes a fantastic candidate for the captain’s spot in your lineups.

When he’s been right, Chase Claypool has produced more double-digit fantasy performances than not this season. A toe injury has diminished that production capacity as of late. Even still, he’s managed to come through with a steady stream of fantasy points week after week. His best outing of the year came against the Broncos in Week 5. That day saw him secure five of his six targets for 130 yards and a touchdown. Sadly, he hasn’t found the end zone since then. Of course, that hasn’t stopped him from being the second most targeted receiver on the team. Over his last six games, Claypool has seen 37 targets. His only real drawback has been his ability to convert them into catches. He’s only secured 19 of his looks in that span. His floor is manageable, but his ceiling, especially this week, is what makes him a solid play.

It’s been a rough ride for the Vikings’ pass defense this season. Minnesota has the distinction of being the worst fantasy defense against wide receivers. They have also proven that they are susceptible to giving up huge fantasy days to more than one receiver. In their Week 11 matchup against Green Bay, both Davante Adams and Marquez Valdes-Scantling went off. Each had over 100 yards and both found the end zone. In fact, Adams made the trip twice. Last week, Amon-Ra St. Brown of the hapless Lions even managed to catch 10 passes for 86 yards and the game-winning touchdown. From what it sounds like, Ben Roethlisberger expects to practice in full the rest of the week and play on Thursday. This means there will not be a dropoff in Claypool’s Week 14 NFL Thursday Night Football potential as a DraftKings hero.

It’s been fun getting to know Pat Freiemuth this season. The rookie out of Penn St. has provided some excitement to a Pittsburgh passing game that has been otherwise lackluster. Impressively, he’s managed to turn in six double-digit fantasy point performances so far in his first year. This includes his memorable two-touchdown game in Week 9 against the Bears. His overall potential keeps him in the mix week after week, making him a prime fantasy darling. In all but three games this season, Freiermuth has seen at least four targets. He currently sits as the 12th most targeted tight end in the league. With his team in a heated playoff battle, expect him to factor into the offense for the rest of the season. His quarterback is battling a bad shoulder which could mean even more short-ranged targets for the exciting rookie.

That’s ✌️ for Pat Freiermuth and the @steelers! pic.twitter.com/p3jpP1TbEC

To make things even better, he could be catching his opponents at just the right time. Minnesota is fresh off of allowing not one, but two Detroit tight ends to score a touchdown against them. Both T.J. Hockenson and Brock Wright found the end zone in the Lions’ victory. They accounted for two of the only three touchdowns the Vikings have surrendered to the position this season. The Minnesota defense had done well to contain opposing tight ends for most of the season. That said, they have shown cracks over the last three weeks that can be exploited. All three of the scores they have allowed have come in that span. This is shaping up to be another week in which a Top-15 tight end should have a solid fantasy day against them.

Reports after the Vikings Tuesday practice are that Adam Thielen will not play Week 14 Thursday night and is not available for your DraftKings lineups. This opens the door for K.J. Osborn to see an increase in usage. It’s true that Thielen’s absence could just lead to more carries for Mattison and more targets in Justin Jefferson’s direction. Although, without Thielen on the field, Osborn saw seven targets last week against the Lions. He caught four of them for 47 yards and a touchdown. Of course, the second-year player has proven to have standalone fantasy value as a receiver. Back in Week 2, he caught five passes for 91 yards and a touchdown. In Week 6 against Carolina, he snared six of his seven targets for 78 yards and a score. Even in the shadow of Jefferson, Osborn should provide solid value for your lineups.

For the most part, the Steelers have been tough to throw the ball against. They are among the Top-15 best in the league in terms of passing yards allowed. So far this season, they have only allowed four wideouts to surpass 100-yards against them. That said, in two out of the last three weeks, they have allowed such a game. Two weeks ago, Tee Higgins touched them up for 114 yards and a touchdown. The week before that, Keenan Allen went for 112 yards on nine receptions. Steelers star cornerback Joe Haden may not play this week. This could very much benefit the Minnesota pass catchers. It should boost Osborn’s value as well in this Week 14 NFL Thursday Night Football matchup and DraftKings lineup.