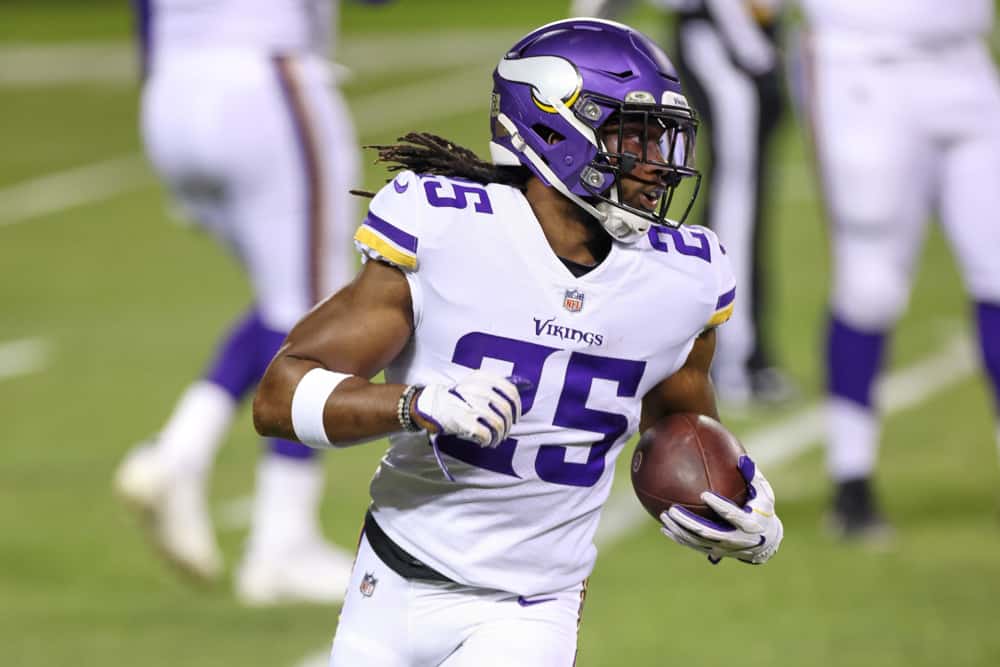 Yesterday was an absolutely brutal day for some fantasy managers with both Dalvin Cook and Christian McCaffrey going down. While this is obviously a tough pill to swallow if you had either rostered, there is still some hope on the waiver wire. Obviously, Alexander Mattison and Chuba Hubbard are top targets during the Week 13 FAAB run, but who else should you target? Let’s dive into some potential season-changing moves you could make this week.

This will come as no surprise but we’re going to start with Alexander Mattison. Mattison has just as high a ceiling as anyone in the league when he’s on the field as a starter. In his two weeks serving as the RB1, he has scored 23.1 and 26.3 points. Additionally following Cook’s injury this week he took 7 carries for 21 yards and a touchdown and also caught 2 of 3 targets. With Cook out indefinitely due to a torn labrum, Mattison is invaluable. I think you could spend up to 30% of your remaining FAAB on Mattison pending an official timetable for Cook.

#Vikings RB Dalvin Cook tore his labrum while dislocating his shoulder yesterday, sources said the MRI revealed. But the ailment is not season-ending. The hope is this is like 2019, when the team rests Cook a few games to have him healthy for a playoff run.

For those who have yet to see, McCaffrey is officially out for the season. While this is a bone-crushing blow for some, it’s an opportunity to spend big on Chuba Hubbard. In McCaffrey’s absence, Hubbard averaged roughly 13 points per game. While these are not McCaffrey-like numbers they still are worthy of an RB2 or Flex consideration from week to week. If you’re thin at RB I’d recommend throwing close to 25% of your FAAB budget on Hubbard.

Once again this next player is sore news for some but it’s time to officially look at Boston Scott as an RB2 (sorry Miles Sanders managers). Scott played on 51% of offensive snaps this week and received 6 more carries than Sanders. In addition to that Scott also ran for 64 yards and caught 2 of his 3 targets. In an offense that thrives best when it’s running the ball, the guy on the field the most could be very valuable. I’d be willing to spend 20% of my FAAB budget on Boston Scott this week.

Finally, I’ve been waiting for weeks and now we should see Taysom Hill starting. Per Ian Rappaport, Hill is likely to start this Thursday night against the Cowboys. This instantly elevates Hill to a QB1 in fantasy as he possesses immense rushing potential. Everyone knows what Hill can do on the ground as he has run for 3 touchdowns and 104 yards on 20 carries this year. As a passer, he’s a bit less known but the rushing opportunity alone could make him a viable starter, I’d spend up to 15% of y0ur week 13 FAAB budget here.

Sources: The #Saints appear poised to make a QB change. Taysom Hill is taking first-team reps this week in practice in preparation to face the #Cowboys. Trevor Siemian is taking No. 2 reps.

This week we have a repeat player from last: Dontrell Hilliard. With Adrian Peterson being waived, Hilliard is a guy I like even more. While he did see a decrease in snap count percentage he was still on the field for 51% of offensive snaps. Additionally, he was more effective even with being on the field less. He took 12 carries for 131 yards and a touchdown and additionally caught 1 of 2 targets. If you do miss out on the Mattison sweepstakes Hilliard could be the perfect replacement. I’d spend anywhere from 10-15% of your budget depending on whether Hubbard, Mattison, and Scott are available.

This week we saw Van Jefferson take 3 catches for 93 yards and a touchdown. While those numbers were a bit inflated by a deep ball there is still room for promise. He was on the field for 98% of the offensive snaps and additionally saw 9 targets. It’s clear that not only does Stafford fully trust Jefferson, he also is likely their best deep threat. With the prior season-ending injury to Robert Woods, Jefferson sits at WR3 for the Rams. With a pass-heavy offense, this makes Jefferson worth about 10% of your budget during the Week 13 FAAB run.

In addition to the injuries to both CMC and Dalvin Cook we also DeAndre Swift go down on Thanksgiving. Swift is currently listed as day-to-day with a shoulder sprain, meaning we could see him miss maybe a week. If this is the case I would think Jammal Williams is worth a look. Following Swift’s injury Thursday, Williams took 15 carries for 65 yards and caught 5 passes. If we see Swift ruled out Williams is instantly an RB2 next week. I’d spend up to 5% if you are desperate for a win, however, I’d recommend 2% normally.

Here again, comes a repeat player from last week in Nick Westbrook-Ikhine. Following an 8 target game in Week 11 we saw Westbrook get 5 this week for 2 catches, 25 yards, and a touchdown. More importantly, AJ Brown was placed on the IR, resulting in an 83% offensive snap percentage for Westbrook. Going forward Westbrook should be one of the top targets in a run-first offense. I’d spend about 2%  of your Week 13 FAAB budget on him as he’ll likely fly under the radar.

After review, Nick Westbrook-Ikhine is in! #Titans

Leading off our no big targets is Golden Tate. While Tate was not promoted to the active roster for Week 12, I would guess that is coming. The Titans are incredibly thin at the WR position and are likely getting desperate. If Tate still has some left in the tank he could be worth a no-bid.

While I’ve already mentioned McCaffrey’s injury numerous times, there is someone else affected. Ameer Abdullah currently sits at RB2 on the Carolina Panthers. While he has not been particularly effective all year, he did manage to receive 6 targets this Sunday. This workload alone makes him deserving of a no-bid.

I normally don’t dive into kickers too much on this piece but Evan McPherson is having a great year. He’s hit 7 out of 8 attempts from 50+ yards and only missed 3 total kicks. If you’re frustrated with your current kicker, consider a straight swap here.

Darren Waller suffered an IT-Band injury this Thursday against Dallas. While the results of the MRI are good news, it is unclear if he will miss time. If this is the case and he misses a game or two Foster Moreau should be worth an add. He’s scored 3 touchdowns thus far on the year and would serve as a good spot starter in Waller’s absence.

#Raiders Pro Bowl TE Darren Waller suffered just a strained IT band in his knee, sources told me and @TomPelissero said after his MRI. Some very good news.

Our final player this week does not exactly qualify for the 50% threshold. However, this player could win you, leagues. Currently rostered in 83.6% of weeks Derrick Henry could return week 17. So, this is my PSA to those sitting in that 16.4%; go out and get Henry for the playoffs while the rest of your league isn’t paying attention with their Week 13 FAAB.