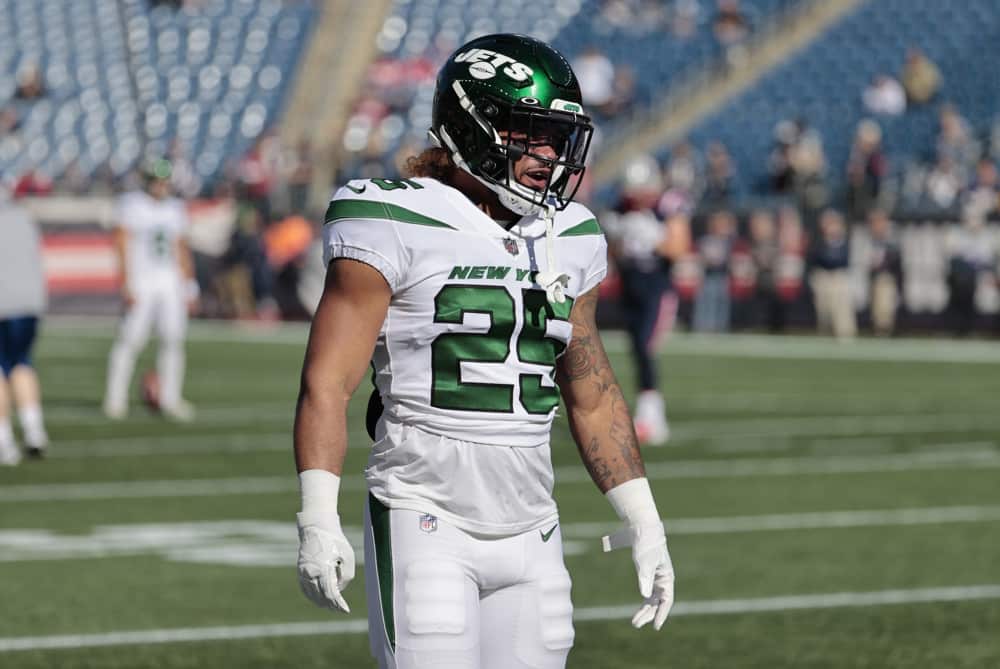 As another eventful week in the NFL draws to a close we get another week closer to fantasy playoffs. Whether you’re trying to avoid the last place punishment or win the cash prize that comes with first, the bids you make this week might just decide your season. With that in mind, let’s dive into some potential league winners, spot starters, and everything in between available with your Week 12 FAAB.

Elijah Moore is on an absolute tear right now. If you’re looking to pick him up this is likely your last chance as I’d expect that 40% rostered number to skyrocket. Following two stellar performances of 27.4 and 13.4 points, we saw Moore catch 8 of 11 targets for 141 yards and a touchdown. Simply put, on the pace he is on Moore is a potential league winner as he’s an every-week starter. I’d spend 20% of your week 12 FAAB budget on him.

Well, I’m just as surprised as you guys probably are… but here comes the second New York Jet: Ty Johnson. While not overly effective thus far, he was playing behind the recently injured Michael Carter. As for Carter, he is set to miss 2-3 weeks with a high ankle sprain. For those next two weeks, we should see a serious production increase from either Tevin Coleman or Ty Johnson. Between the two Johnson should catch the nod because of his pass-catching ability. Spend close to 15% of your budget on Johnson if you need a running back to get you to the playoffs.

Jets’ rookie RB Michael Carter suffered a low-grade high ankle sprain that is expected to sideline him 2-3 weeks, per sources.

Perhaps the biggest surprise of Week 11, aside from Jonathan Taylor and Austin Ekeler combining for 9 touchdowns, was Dontrell Hilliard of the Titans. Since the injury to Derrick Henry, we’ve all been waiting for a running back to take over in this backfield and it may have happened. This week, with the injury to Jeremy McNichols, Hilliard played on 63% of offensive snaps. On top of his 10 targets which led the team, he also had 8 receptions for 47 yards and also took 7 carries for 35 yards. If you’re feeling risky you could spend up to about 15% of your FAAB on him, however, I’d recommend about 10-12% given the small sample size.

Last week we all saw Cam Newton’s “I’m baaaaaack,” clip after scoring a touchdown in his first game, yet he saw little playing time. This week after stepping into the starting role we once again saw Newton flash signs of his vintage self. He threw for 189 yards and two touchdowns while running for 46 yards and a touchdown on 10 carries. While this performance was against what has been a pretty shaky Washington defense I still have faith in Newton to keep it rolling with Miami and Atlanta on deck. Spend about 8% of your budget on Newton if you’re in need of a reliable QB.

Another surprise performance we saw this weekend was Nick Westbrook-Ikhine of the Titans. In the absence of Julio Jones, he caught 7 of 8 targets for 107 yards. Additionally, with WR2 Marcus Johnson exiting in the first quarter with a hamstring injury, we saw Westbrook elevated to WR2. While we do not know the extent of Johnson’s hamstring injury one thing for sure is if he misses time Westbrook should see an increased workload as he did this week. I’d spent about 5% of my FAAB budget on Westbrook.

I’ll begin here with my favorite spot starter for this week: Cedrick Wilson. With Amari Cooper out due to COVID-19 Protocols and CeeDee Lamb questionable after sustaining a head injury on Sunday, Wilson should step into the WR2 role. This makes Wilson an extremely valuable pickup in a potent Cowboys offense. If you’re desperate for a win, Wilson could get you it, making 5% worth it. However, he’ll likely return to a WR4 role in week 13 making me only willing to spend up to 3%.

Taylor Heinicke has quietly been averaging 17 points per game even with a subpar Washington offense around him. Heincke has been averaging 27.6 rushing and 239 passing yards per game thus far. While these numbers don’t jump off the page, likely the reason he’s only rostered in 12.8% of leagues; he possesses some upside next week against Seattle. The Seahawks are currently the 30th ranked pass defense in the league and are giving up 279.6 yards per game. With a matchup as favorable as this I would be willing to spend anywhere from 1 to 2% of FAAB for a spot starter.

As we all know the Atlanta Falcons have been struggling lately. The loss of Calvin Ridley has proved to be big, as many of us would have expected. This has led to Kyle Pitts taking on a larger role and in turn receiving far more attention from defenses. Enter Russell Gage, while their offense was shut out last Thursday, Gage still managed to be productive catching 5 of 8 targets for 49 yards. On simply nothing but principle a guy who’s arguably his team’s WR1 heading into a game against the Jaguars could be worth a start. Spend about 2% of your Week 12 FAAB here if you’re in need of a WR.

Our first no-bid target is DeeJay Dallas. While Dallas wasn’t used too much this, he did take 4 carries for 25 yards and a touchdown. He also caught one of 2 targets. With Chris Carson out for the year and Rashaad Penny once again injured we can expect Dallas to receive more work going forward.

Boston Scott enters the next two weeks under the RB2 role for Philadelphia, with Jordan Howard likely out. While the Eagles struggled to find success on the ground early this year, they’re now the number 2 rushing offense in the league. For the next week, we can expect Scott to receive a decent amount of work, making him worth a pickup.

I previously mentioned the Michael Carter situation in New York as he is set to miss 2-3 weeks. As a result, I’d recommend going with Ty Johnson, as I expect him to fill the role. However, if you want a very low-risk high-reward candidate Tevin Coleman could be worth a look in case he’s able to usurp the role.

DeAndre Carter of the Football Team is quietly on a three-game TD streak. Even though he’s been rather touchdown-dependent lately his targets are a reason to believe he can get something going. Over the last three games, he’s seen 6, 6, and 3 targets and totaled 129 yards. Like most of the guys in this section, Carter possesses very little risk and could have a high reward as he faces an abysmal pass defense next week in the Seahawks.

I’ve made this prediction a few times but I think the Taysom Hill start is coming. Whether it is this week or next when it happens Hill will be in the QB1 conversation. If and when Payton eventually makes the switch there will be a dash to scoop up Hill so you’ll be glad to have him post-Weel 12 FAAB run.