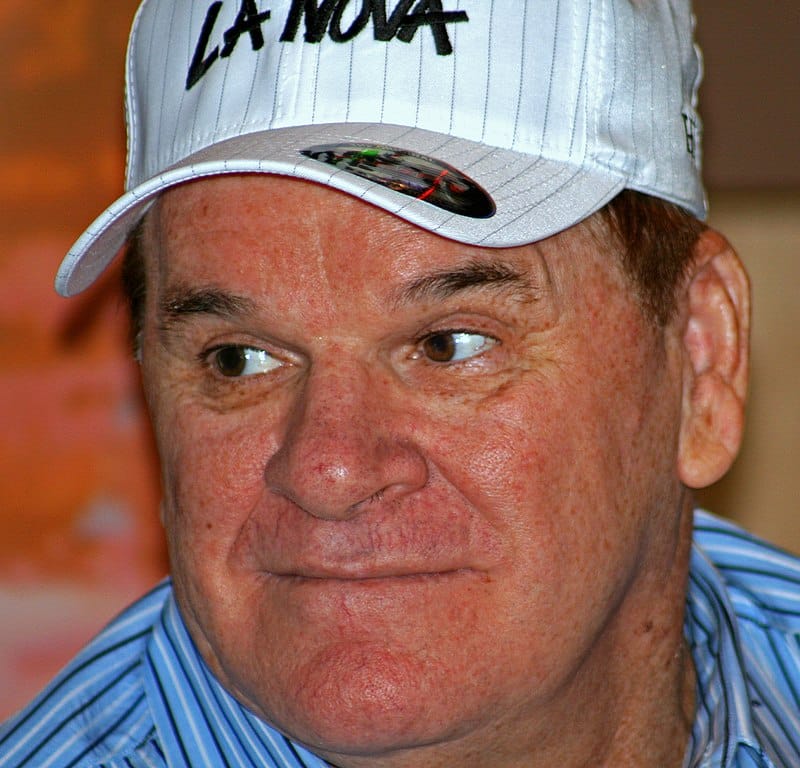 When you think about it, many baseball players are known for one thing: their baseball talent. No one thinks of Derek Jeter and pictures him being a skilled horse jockey. No one looks at Bryce Harper, Aaron Judge or Manny Machado and pictures them being talented at something else besides baseball.

Yet, some of the biggest baseballers have had outstanding careers outside of the diamond. In this article, we’ll focus more on baseball players with a known love for sports betting. Let’s dive right in.

Based on his baseball accolades, Pete Rose deserves a place in the MLB Hall of Fame. Instead, he’s facing a lifetime ban from baseball. What’s more, he’s ineligible for a shot in the HOF. Rose’s troubles started in 1989 while he was a manager for the Cincinnati Reds.

At the time, an investigation by Sports Illustrated accused Rose of betting on baseball games both while as a player and as a manager. The legendary hitter admitted to placing sports bets for the most part of his baseball career. But he denied ever wagering on games involving the Reds.

The MLB responded with a punishment that would haunt Rose for the rest of his life. Not only would he never manage a baseball team ever again, but he was also banned from everything related to the sport. In 1991, the Baseball Hall of Fame added salt to Rose’s injury by voting him ineligible for HOF voting.

Considering you can bet on baseball in 2021 and you can even claim free bets on safebetting sites.com, some baseball fans think Rose’s ban should be reversed. In fact, they want him to be voted into the HOF while he’s still alive.

Shawn Chacon is a retired baseballer who joined the league in 2001 as a player for the Colorado Rockies. He had a rough start to his career as a striker but improved drastically after converting into a closer.

In 2005, Chacon joined the New York Yankees to play for the franchise’s minor league team. He didn’t last in New York, though, as he later joined the Pirates a year later before leaving for the Houston Astros in 2008.

Chacon ended his career in 2008 after a confrontation with the Astros’ then GM, Ed Wade. The closer was accused of grabbing the manager by his neck and throwing him down. After his release, Chacon got into legal troubles.

The Caesars Casinos—best known for sports betting—procured an arrest warrant for Chacon due to bad debts totaling $150,000. The casino later resolved the matter and offered not to prosecute the MLB player any further.

Denny McLain was a pitcher for the Detroit Tigers in the 1960s and early 1970s. In 1970, Sports Illustrated published an article accusing McLain of being part of a sports gambling ring in the 1967 baseball season.

SI stated that McLain, who was injured at one point in 1967, had his toes crashed by the mafia for failing to payout a horse race betting win. The League responded by suspending the pitcher for three months in 1970.

McLain responded rather negatively to the suspension. During an interview towards the end of the season, the Pitcher attacked reporters with buckets of water. Later on, he appeared with a gun in the stadium and was suspended until the season was over.

McLain retired two years later—in 1972. He ventured into a career in music that culminated in two albums and several appearances on reality TV shows.

In 1919, eight players contracted by the Chicago White Sox conspired to throw the World Series in exchange for payouts by gamblers. The players threw the series to the Cincinnati Reds because they felt they were not paid enough by the then franchise owner.

The players included star player Joe Jackson, Chick Gandil, Eddie Cicotte and Kevin Costner. After the Reds unexpectedly won the series, word got out that the tournament had been fixed. The league made an investigation.

Surprisingly, the investigation found the eight players, dubbed the Black Sox, not guilty of fraud. Nonetheless, league commission Kenesaw Landis banned the players from ever participating in baseball for life.

Leo Durocher is a former baseball player and manager posthumously voted into the HOF in 1994. Leo was a controversial man. For starters, he once held the record for the most ejections for a manager at 95.

Second, Durocher was notorious for crashing with fellow MLB managers, general managers and franchise owners. In 1947, Durocher got into an ugly confrontation with Yankees’ co-owner, Larry McPhail.

McPhail accused Durocher of betting on sports. In turn, Durocher accused McPhail of the same crime. The then MLB Commissioner (a friend of McPhail), suspended Durocher throughout the 1947 season.

Although controversial, Durocher is widely honored for publicly showing support to baseballers of color. A case in point, he once described Jackie Robinson—the first black player in the MLB—as a “Durocher with talent.”

#6: Kris Bryant and His MLB Friends

In 2015, Giants’ baseman Kris Bryant organized a charity event starring his baseball friends at the MGM Grand Resort in Las Vegas. Some of the most famous players in attendance included Hall of Famers Eddie Murray and Dave Winfield.

Bryce was also in attendance and helped Bryant with the day’s co-hosting gig. Additionally, some legends like Shane Victorino, Eric Davis and Bobby Bonilla also attended. That said, the purpose of the event was to raise money for charity by beating MLB players in gambling games.

If you knocked out a former baseballer, you won a signed jersey from the player you knocked out. In case you’re wondering, NBA player Landry Fields won the final tournament and went home with Kenny Lofton’s jersey.

Baseball players are banned from betting on sports. As such, seldom will you learn of a famous player that wagers on sports. When it happens, it’s a major scandal. And in Pete Rose’s case, it was a career-ending scandal. Meanwhile, baseballers can gamble at casinos, especially after retirement.