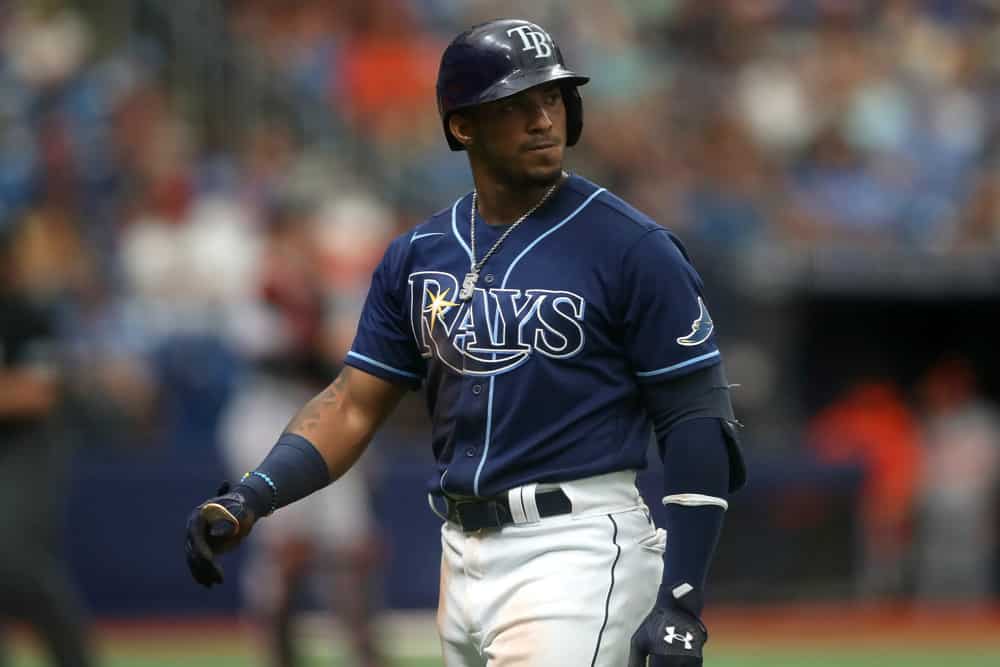 Now that all the teams have settled after the trade deadline, it’s time to see what everybody is made of. While neither the Red Sox nor the Rays made a big splash on Friday, both of them are still poised for a late run into October. The hitting from them so far this series should make for an exciting Sunday Night Baseball game, so let’s check out the MLB DFS slate for it.

I’m a big fan of using a pitcher in the captain’s slot for Showdown Captain mode. With the exception of a huge offensive explosion, which both teams did actually have on Saturday, it’s usually the safest play. Although both of these teams have the ability to do that at just about any time, McClanahan hasn’t given up more than three runs in a single start since the first week of June. He’s also struck out at least five guys in each of his last six starts. Just how much damage he can do for you here should only be limited by his pitch count.

Some people like to shy away from the double starter lineups in MLB DFS, but I think they tend to pan out more often than not. Pivetta has had a little bit of a rough stretch, having given up four runs in each of his last three outings, but he has the stuff that lends itself to big strikeout games. He notched double-digit strikeouts against Oakland earlier this month and twice earlier in the year was only one off that mark. As long as he keeps Tampa Bay in the park tonight, he will be well worth the second pitcher salary.

Franco is absolutely chewing up the Red Sox in this series and I’m banking on the idea that it’ll continue. He’s 4-for-8 so far in this series with a pair of triples, a double, and four RBI. This isn’t the only time that he chewed up Red Sox pitching either. He kicked off his MLB career with a homer against Boston. With 36 fantasy points in his last two games, it’s hard not to put the wunderkind in the lineup tonight.

If we’re playing Franco because he’s the hot hand, we may be putting Margot in our Sunday Night Baseball lineup for the exact opposite reason. It seems like bad analysis to assume that someone is due, but Margot seems to be that person. Since returning from a bad hamstring, Margot is just 1-for-12 with just one walk. He did make some better contact on Friday, which makes me feel like his timing is coming back. They gave him the day off on Saturday to get things right, but his replacement Kevin Kiermaier went 0-for-4 with three strikeouts. I expect him back in the lineup tonight and see him getting back on the board for tonight’s MLB DFS slate.

At $5,400 Renfroe is a steal. He’s averaging 7.2 fantasy points a game on the year and that’s partly in thanks to the RBI chances he always seems to have. Hitting behind Rafael Devers, J.D. Martinez, and Xander Bogaerts, it’s pretty rare to see Renfroe leading off an inning. He didn’t hit well in Toronto, which caused his DFS cost to go down. However, this series in Tampa Bay, he’s had a double in each game so far. When you add in that he gets to face a left-handed pitcher, it gives you that last bit of incentive to run him into your lineup.

If you’re going to go with a cheap option in MLB DFS, you might as well snag one with big fly power. Dalbec is exactly that but is actually on a nice little run too. He’s quietly on a three-game hitting streak with an RBI in each of those games. He’s also got an extra base hit in two of those three games too – one of which was a dinger last night. Sure, he’s liable to strike out a bunch of times, but for this price, you’re looking for something big in just one at bat.

Make sure to check out all the great MLB coverage we have to offer and be sure to listen to the MLB Gambling Podcast, which airs twice a week. This week the guys are breaking down the crazy trade deadline.