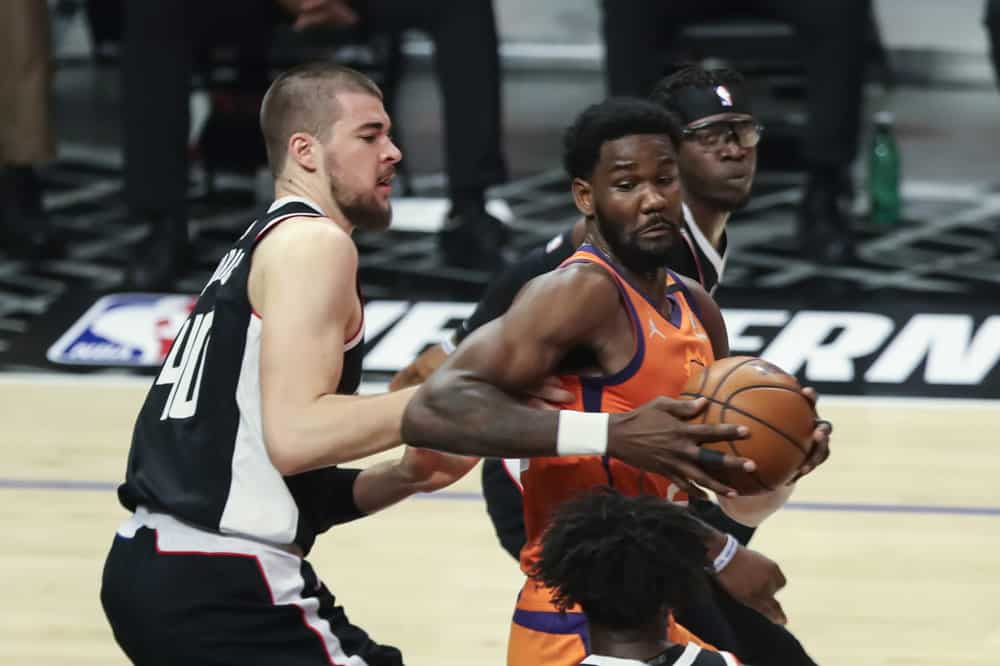 Don’t look now, but NBA Finals Game Six may be your last chance to play daily fantasy for basketball this season. After giving you a winning lineup for Game Five, we want to help you boost that account balance one more time. Here’s the squad that we think will get it done.

While Phoenix didn’t walk away with the win last time out, there is plenty I saw from Ayton that gives me confidence enough in him to captain him for NBA Finals Game Six. He got back to scoring with his highest total since Game One. He got the block party started again as well – he’s swatted five shots in the last two games. He also did a bit better at getting to the foul like, which may be part of how he got that point total up, but it should help keep the points stable. All of those are good signs for the Arizona graduate, but there’s still a little upside to be had. He was on the lower side for rebounds for this finals. This means he’s got room for improvement and I think 15+ boards should be reachable.

With a chance to bring the NBA title to Milwaukee at home, you have to play Giannis. He put up his lowest fantasy total of these finals in Game Five, which was still 52.3. The three previous games saw him in at least the mid-60s each time out, with one game over 70. He’s going to continue to put up huge numbers and with the series on the line in NBA Finals Game Six, he’s the best high priced option that exists and it isn’t close.

After the night Holiday had in Game Five, I expected his cost to rise pretty significantly. However, here he is at the same exact price point from the previous night. This is extra crazy because, as I outlined prior to Game Five, he has been filling out the stat sheet very nicely in these playoffs. This past game is actually the only where he fell below five rebounds. Prior to that he had at least five boards and at least seven dimes in each contest. This means when he scores well, like he did on Saturday, this price tag is a joke.

In a word, Crowder has been hot in these finals. The last four games of this series have been four of his six highest scoring games in these playoffs. Still, he doesn’t cost a whole lot more than he did throughout the playoffs. The big difference in those games has been his ability to shoot the three. He’s not necessarily shooting more often, but he is making them at a far higher clip. If the Bucks come out strong early and turn this into a shootout, there is a chance we’ll not only see Crowder keep making them more often, but we’ll see him up the attempts as well.

There’s been exactly one game in these playoffs that Cameron Johnson didn’t put up double digit fantasy points. He’s been averaging nearly 18 points and has been pretty steady in that way. It always comes in a pretty standard way too – he gets around 8-12 points, 3-5 rebounds, and a dime or two. At a price point this low, I think he’s a really safe option that should help you get into the money.

The numbers haven’t looked that great for P.J. Tucker in the past few games. He seems to be on a bit of a skid, which the $3,400 price tag would seem to indicate. That number is his lowest cost except for the second game of the postseason. So with all of that, why am I riding with Tucker anyways for NBA Finals Game Six? Despite those numbers, Tucker is a lock for 25+ minutes on the floor. For a low price option to round out a lineup, I love the idea that he’s going to have a lot of chances. He’s probably going to wind up with assist or two and a steal just based on opportunity. If he can get back near that five rebound mark, he will be well worth what you paid for him.

Before NBA Finals Game Six, make sure to subscribe to NBA Gambling Podcast on Apple and Spotify. Check out our NBA expert’s updated against-the-spread NBA picks today and EVERY DAMN DAY for EVERY DAMN GAME at SG.PN/nbapicks.