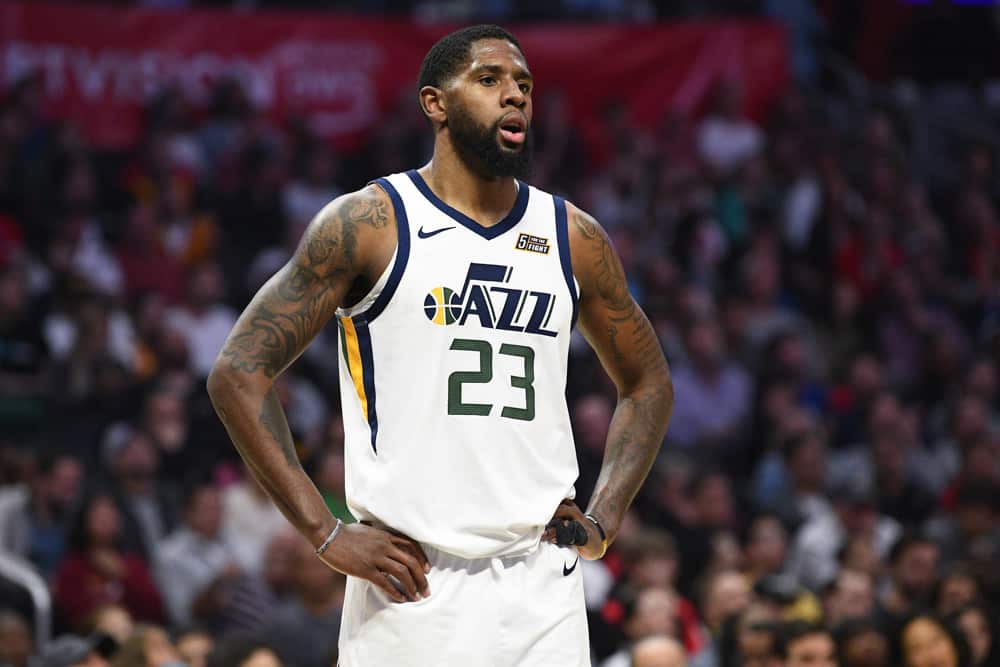 Hello everyone! The second round of the NBA Playoffs continues, and so do our NBA DFS picks. Today features another good-looking two-game slate with two games that should be competitive. These slates can be tricky, and there isn’t much rhyme and reason for slates like this. However, there’s money to be made with a little skill mixed with a little luck. Anyways, let’s jump right in shall we?

So long as James Harden remains out for Brooklyn, I will continue to play Kyrie Irving. He isn’t quite as good of an option with Harden in the lineup. However, he seemingly takes a step up when he is out. Kyrie averages 45.9 FPPG, and he’s usually a pretty reliable DFS play despite being expensive. This is one instance where I will pay up for him though. He’s topped 40 fantasy points in each game this series, and I see no reason why he won’t do the same again.

This can be a surprisingly risky play, but I feel as though it will pan out. Paul George is a reliable player, but he isn’t exactly worth this expensive price sometimes. He’s shot under 50% from the floor in five straight games, which is unusual for him. I believe he’s due for a better than 50% shooting game soon. There’s always a chance he tops the 40+ fantasy points mark even if he doesn’t have an efficient shooting day, which gives me confidence in playing him.

I’m stacking the Clippers with Luke Kennard here. This is about as risky of a play as there is, but it can pay off in a big way. Kennard was a big factor last game with 18 points and two rebounds in 29 minutes. This was promising considering he didn’t play in four games last series. I believe the Clippers have finally figured out that Kennard needs to be on the court. That being said, I’ll take a shot at what should be a lesser-owned cheap player to save salary.

Royce O’Neale has been one of the most solid NBA DFS picks you can find this postseason. His pricing has been cheap, and he’s been quite efficient. O’Neale only averaged about 22.5 FPPG this year. However, he’s averaging 27.8 FPPG this postseason. O’Neale has topped 29 fantasy points in four of his six games also. He is a solid, cheap forward with decent playing time and the ability to really pop off in games where his threes are falling in as well.

This is another player who is becoming a regular in my NBA DFS picks. Brook Lopez continues to be super cheap, and I’ll gladly take him once again. He’s locked into his role with Milwaukee, and he sees 25+ minutes every game. Lopez does only average 24.1 FPPG, but he’s also seen his fair share of 30+ fantasy points games. All we need is an efficient outing from Lopez to be the steal of the day, but we should be fine with any output for this price.

It appears as though DraftKings is finally catching on. Donovan Mitchell is at his highest price of the postseason, but that isn’t stopping me. Mitchell averages 43.2 FPPG, and he’s been playing on another level this postseason. He’s now scored 30+ points in three straights and he’s topped 40 fantasy points in every playoff game but one. Everyone will be on Mitchell, but just trust me. You want to have him in pretty much all of your lineups for this slate.

Bruce Brown is another value player who will probably be pretty chalky. He’s scored in double digits in three of his last four. Brown has topped 25 fantasy points in three of those four as well and put up 21.5 fantasy points in the other. There are minutes to go around with Harden out, and Brown seems to be the biggest beneficiary from the bench. I do expect a lot of people to be on him here, but I am going to play it safe and take him as a way to maximize salary cap.

I’m dipping back into the Clippers pool once more for Reggie Jackson. He found himself in foul trouble last game, which slowed his output. However, Jackson has been absolutely electric this postseason. He is averaging 24.6 FPPG during the playoffs. This is including a run of five straight 25+ fantasy points games that included a 43.75 fantasy points outing. I look for Jackson to bounce back with a great outing in this pivotal Game Two against Utah. 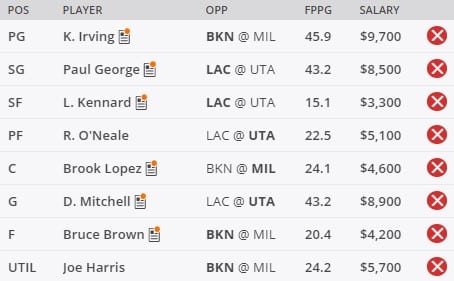