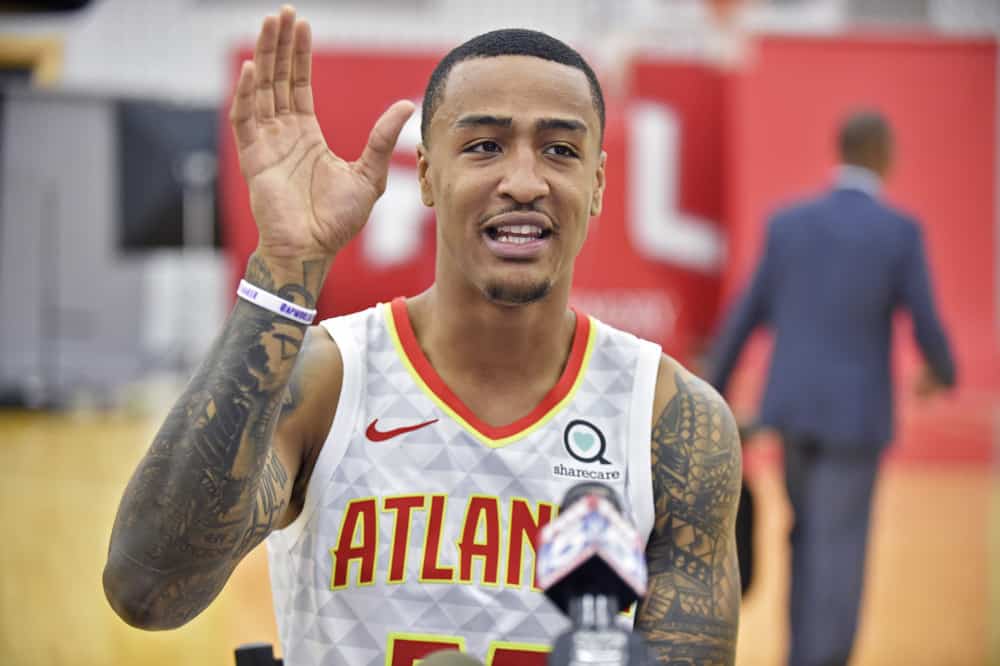 Happy Thursday fellow degens! As the NBA season winds down, NBA DFS can become a tricky game. There are tons of “injuries” around the league, and this can be difficult to navigate. Luckily, I’m here to share my GPP lineup, and boy do I feel good about this one! Let’s not delay things further, let’s dive right in!

I’m kicking this lineup off with a very trusty face in Damian Lillard. Portland currently sits in the 5th seed, but they are in a position where they need to win. Dallas and the Lakers are both within one game of Portland. This means the Trail Blazers need a few wins to avoid the play-in tournament.

That being said, Portland has a date with Phoenix on Thursday, and the Suns have no reason to really try. Sure, the Suns could still take the one seed or fall to the third seed. However, you have to wonder how badly Phoenix really wants to win. The motivation will be there for the Blazers, and Dame will be the one to lead the charge.

Mark this down because this will be the value play of the day. Everyone needs a cheap source of fantasy points, and Seth Curry fits the criteria. He only averages 21.9 FPPG, but this number is a little misleading. Curry has topped the 30 fantasy points mark in three of his last five outings.

His 76ers are set to take on the Heat, and this isn’t a terrible matchup. Miami is middle of the road with their perimeter defense, and Curry is a pure shooter. Philly only needs a win or two to lock up the one seed, and this is a winnable game. I believe that Curry will be good for at least 25 to 30 fantasy points in this one.

This is my only “dart throw” in this lineup, and I say that somewhat sarcastically. Justin Holiday isn’t the most consistent player, but he’s finding form at the right time. Indiana could improve their play-in tournament situation with a few wins, so the motivation will be there.

Holiday has been in the starting lineup since Edmond Sumner went down, and he’s done well in this increased role. He’s scored in double figures in both of his starts, and he put up at least 23.25 fantasy points in each of those games. That’s a good output for the price, and Holiday will surely have low ownership as well.

Playing Julius Randle on Thursday seems like a no-brainer. New York is set to do battle with San Antonio, and this is a game which will play right into Randle’s skillset. The Knicks are locked into the playoffs and will avoid the play-in tourney, but they are only a half game back from the four seed Atlanta also.

Randle has pieced together an excellent season, especially in NBA DFS terms. He’s averaging 48.5 FPPG, and he’s flirted with this number in almost every game this year. With a winnable game ahead and the motivation of better seeding, it’s better to go ahead and pay up for Randle.

You aren’t going to find a better cheap option at the center position than Khem Birch. With Toronto eliminated from playoff contention, they have elected to sit their starters. This is good news for Birch, who was already seeing around 30 minutes a game as his usage skyrockets.

Birch and Gary Trent Jr. will be expected to carry the bulk of the offensive load, and a matchup with Chicago shouldn’t be too bad on them. Birch only averages 18.6 FPPG, but that number is mudded down from before his trade. He’s topped 30 fantasy points in five of his last ten, and there’s a good chance he tops 30 fantasy points here.

Goran Dragic has been the personification of consistency in NBA DFS all season long. He averages 25.7 FPPG, and he’s good for around this number in each game. His Heat have a chance to jump to the four seed, and I’m sure they would love to win and improve their playoff positioning.

Miami is set to take on the 76ers on Thursday. Although this isn’t the best matchup for the Heat, it’s certainly a winnable game. Dragic has shown us time and time again that he can produce regardless of who his opponent is. That being said, I’m going to take a consistent player for a decent price here at the guard position.

I’m going to take a stab in the dark here with a Toronto stack and DeAndre’ Bembry here. Although he’s very hit and miss, I have a funky feeling he’s due for a good game here. As I mentioned, Toronto is sitting their starters, and that means that Bembry should see a decent 25 minutes or so.

Bembry has topped the 20 fantasy points mark in three of his last five games. That isn’t exactly promising, but it does give a glimmer of hope. The Raptors have the Bulls upcoming, who aren’t known for playing the best defensively. If Bembry can get some shots to fall, then we have the steal of the day here for only $4,000.

This is going to be an extremely chalky play, but with good reason. John Collins has been electric the last three games for Atlanta, and his team draws a good matchup in Orlando next. The Hawks are looking to hold on to the four seed, and that all starts with a win over the Magic.

Collins averages 32.5 FPPG, and although he hit a rough patch lately he looks like he’s found his form again. He’s notched at least 30 fantasy points in three straight, and he’s scored no less than 18 points in each of those games. I expect Collins to have a field day against the weakened Magic, and I love the price tag as well. 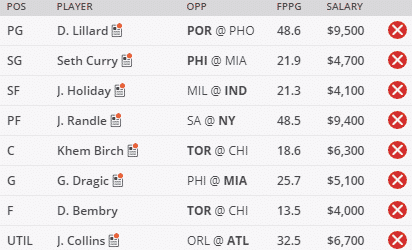