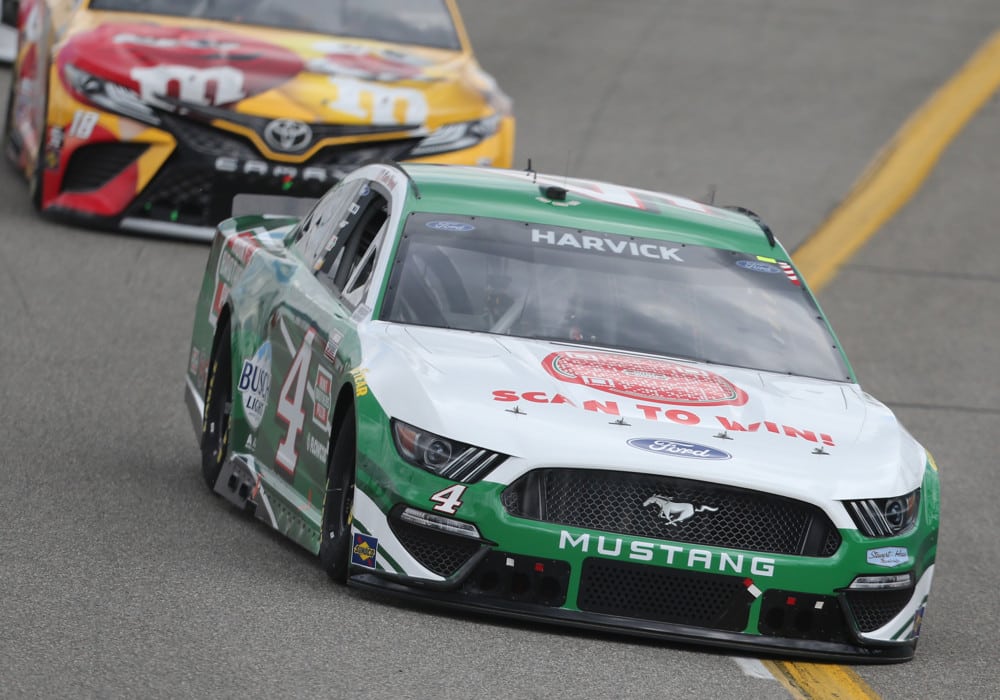 If you are thankful to leave the wild ride that was Talladega behind and are ready for the Buschy McBusch Race 400 this week, you are not alone. Several of the top drivers in NASCAR share your opinion. It was a frustrating day for many of the favorites last weekend. While we avoided the “big one” for all intents and purposes, quite a few little ones ruined what should have been a pleasant drive around the superspeedway. Now though, the Cup series turns its attention back to a much more accommodating 1.5-mile track at the Kansas Speedway. There are 267 laps standing between drivers and the checkered flag. Plus, all the shaking and baking from last week, has put some fast cars in some advantageous fantasy positions. Pull those straps tight and gear up, this will be a fun one.

It’s been a while since Kevin Harvick has shown up in this column. That changes this week due to his history in Kansas and his fourth place finish last week in Talladega. Simply put, no one has dominated Kansas Speedway like Harvick. He sits atop the leaderboard of laps led on the track. In the last ten races here, he’s led 495 of them, edging out Martin Truex Jr. by four laps in that department. He can also add three career wins here to his list of accolades. Last but not least, he knows how to get around this track quickly. Over the last five seasons, he’s turned 364 of the fastest laps in a race.

This week, Harvick will enjoy his best starting position in almost two months. He’ll roll off the grid from the fourth position. This will put him in prime position to get to the front and take off for several laps. That position improves immensely on account of some of his biggest challengers playing catch up to start the race. His price and his potential make him a lock for a cash lineup. He may also be a steal in your Buschy McBusch Race 400 tournament lineups as many people have been disappointed by his season thus far.

Continue down the list of Kansas lap leaders over the last few seasons and you won’t have to go far to find Kyle Busch. In the last six seasons, only Truex and Harvick have paced the field more times than Busch. Over that span, he has racked up 297 total laps in first place including 52 by way of last year’s Spring race. He would go on to finish 11th that day turning 37 of the fastest laps. Busch has been on a tear on this track to boot. Since the Fall running in 2014, he’s finished inside the top-5 eight times out of 12 attempts. In fact, he only finished worse than 10th once in that same sample size.

Rate this Talladega save by Kyle Busch on a scale of 1-18: pic.twitter.com/7PqBSKVKiz

His 9th place start this week puts him within striking distance of the leader from the drop of the green flag. This has not been the most ideal season so far for Busch, but this hasn’t been a normal season either. He should be able to take advantage of being back to a more “normal,” 1.5-mile track this week. In the three races held on similar tracks this season, Busch has produced a 10th place, a 5th place, and a 3rd place finish. It seems as if his team hits the right setup off the trailer for these races. They’ll do it again this week. At his price, Busch will make good on his investment at the aptly named Buschy McBusch Race 400.

Kyle Larson does not have a long history here, but it’s been a decent one. In his 12 career Cup starts, he has five top-10 finishes. Three of them were inside the top-3. Last season he missed both of the Kansas races while serving his suspension. That said, he’s no stranger to leading here when he is on the track. In the Spring race of the 2018 season, he led 101 laps while turning a 22nd place start into a 4th place finish. In the Fall of 2019, his last race on this track, he led 60 laps on the day. While he doesn’t necessarily need those laps to be a good climber, it’s nice to know he has that potential. What does work in his favor here, is that in 8 of those 12 starts, he’s finished 15th or better.

We’re celebrating the car that started it all for @KyleLarsonRacin!

The No. 5 https://t.co/OdrQ85uamk Chevy will sport a #NASCARThrowback scheme based on Kyle Larson‘s first race car. Tune in Sunday, May 9 for the throwback action @TooToughToTame! pic.twitter.com/lQz7o3Hq4s

He’s the most expensive driver this week and maybe for good reason. The fact that a top-10 finish would net you essentially 20 free points should be all the reason you need to lock him into your Buschy McBusch Race 400 DraftKings lineups. But, to build on that, Larson already has a win on a 1.5-mile track this season. He logged a victory in Las Vegas towards the beginning of the season. Not to mention, he finished 4th at Homestead and runner up in Atlanta. The question is not should you play him, it’s how much. You can count on him being chalk, so be ready with one or two alternate lines to counter this should he run into trouble.

The FedEx Toyota has taken home the checkered flag at the Kansas Speedway in two of the last three Cup races here. Denny Hamlin dominated the Fall race of 2019, leading 153 laps on his way to the win. That week, he started the race from the 23rd position. In the 2020 Spring race, he needed only 57 laps to claim his second victory in as many tries. He turned a 10th place start into a first place finish that time. Although he finished 15th in the fall running, he still managed to lead 58 laps in the effort. He’s been in and around the top-15 for the last five years.

A race to the end of Stage 2 and a block by Keselowski kicks off a pileup involving Denny Hamlin, Chase Elliott and others.

And Bubba Wallace picks up the stage win! pic.twitter.com/bKeOvZakl0

This week, Hamlin is a victim, like so many drivers, of a disastrous day in Talladega last week. His 32nd place finish graded out to a middle-of-the-pack start for the driver who until last Sunday had six straight finishes of 4th or better. He’ll be an expensive climber but will end up being worth the price of admission in cash game lineups. Use him sparingly in tournaments as his value is not a secret.