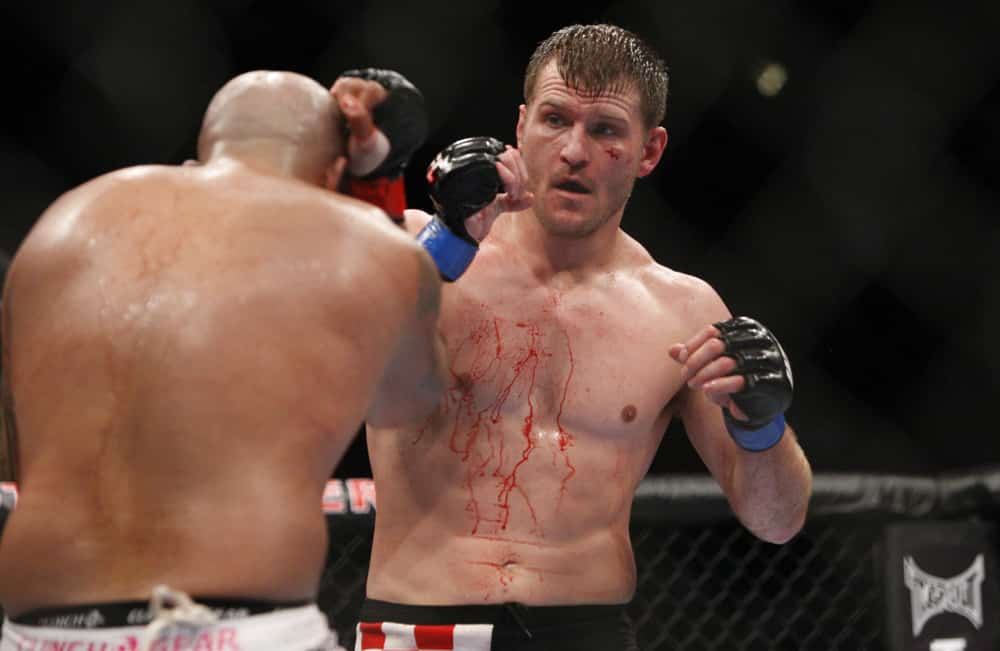 UFC is back at pay-per-view action as a clash of giants will headline UFC 260, this Saturday, at the UFC Apex in Las Vegas, when Stipe Miocic and Francis Ngannou battle for the UFC Heavyweight Championship. The event will also feature a welterweight bout between Tyron Woodley and Vicente Luque, Sean O’Malley will face Thomas Almeida in the bantamweight division, and lightweights Jamie Mullarkey and Khama Worthy will face off in the first fight of the main card. A women’s flyweight bout between Gillian Robertson and Miranda Maverick, which was scheduled for UFC 258, will also take place this Saturday.

The event was heavily impacted by COVID-19 and injuries, with several fights being cancelled or postponed. A Featherweight Championship bout between reigning champion Alexander Volkanovski and former title contender Brian Ortega was expected to serve as the co-main event. However, the fight was cancelled last week after Volkanovski tested positive for COVID-19, and will be rescheduled for a future event. Johnny Walker would face Jimmy Crute in the light heavyweight division, but Walker pulled out of the fight in February with a chest injury. Jimmy Crute was rescheduled to fight Anthony Smith at UFC 261.

More than three years after their first fight, Stipe Miocic will defend his heavyweight title against Francis Ngannou in the main event of this weekend’s card. According to popular online sportsbooks, Ngannou is the favourite heading into the bout, with -121 odds to claim the title.

Following their first encounter in 2018, both men lost their next bouts – Miocic lost the title to Daniel Cormier, and Ngannou was defeated by Derrick Lewis at UFC 226. Since then, they have solidified their positions in the heavyweight division. Miocic regained the title with a technical knockout against Daniel Cormier at UFC 241 in 2019, and defended the title in their second rematch at UFC 252, last year. Ngannou comes from four straight wins, with excellent performances against Curtis Blaydes, former champions Cain Velasquez and Junior dos Santos, and Jairzinho Rozenstruik – he won these bouts in a combined 162 seconds.

But to win this bout, and claim the heavyweight belt, Ngannou must perform better on the canvas. At UFC 220, Miocic played to his strengths and forced Ngannou to wrestle, draining his stamina and rendering him unable to deal heavy blows. Despite taking a few shots, Miocic grinded out a unanimous decision victory.

Although many believe that Ngannou has to have improved his takedown defense in these three years, given his work ethic and the team of coaches and trainers behind him, he hasn’t had to show it as he’s blown through his last four fights.

The first bout of the main card features Khama Worthy and Jamie Mullarkey fighting in the lightweight division. With 20 appearances on the regional circuit, Worthy debuted in the Octagon with fantastic wins against Devonte Smith and Luis Pena, before falling to Ottman Azaitar at UFC Fight Night 177. Mullarkey dropped decisions to Brad Riddell and Fares Ziam in his first two UFC fights. But the Australian went 12-2 on the regional circuit, so it’s just a matter of adapting and bringing back that form to the Octagon.

Originally slated to take place at UFC 258, the flyweight bout between Gillian Robertson and Miranda Maverick will be featured at UFC 260. Last year, Robertson beat Cortney Casey and Poliana Botelho, before being outwrestled by Taila Santos in December. Maverick, a 23-year-old quick athlete with powerful striking and a good wrestling background, registered a stoppage win against Liana Jojua in her promotional debut at UFC 254.

The bantamweight meeting of the evening will pit Sean O’Malley against Thomas Almeida, two of the best young contenders in the 135-pound division. This is a critical moment for O’Malley, following his first professional loss, and a victory would quiet much of the scrutiny he’s been under. Almeida was one of the most explosive fighters in the division before losing his three last bouts, and now looks to rebound after this run of bad results. O’Malley is the overwhelming favourite, with -335 odds.

Former UFC Welterweight Champion Tyron Woodley looks to halt a three-loss run against Vicente Luque, who’s on a two-fight winning streak. After getting beaten by Karamu Usman, GIlbert Burns and Colby Covington, Woodley must improve his recent form and show that he is still capable of big things in the Octagon. In 2019, Brazilian Vicente Luque dropped a decision to Stephen Thompson and went on to win his two bouts in 2020, against Niko Price and Randy Brown. A victory over Woodley would lead him to a step forward in the division this year, and he’s favoured to win with -265 odds.