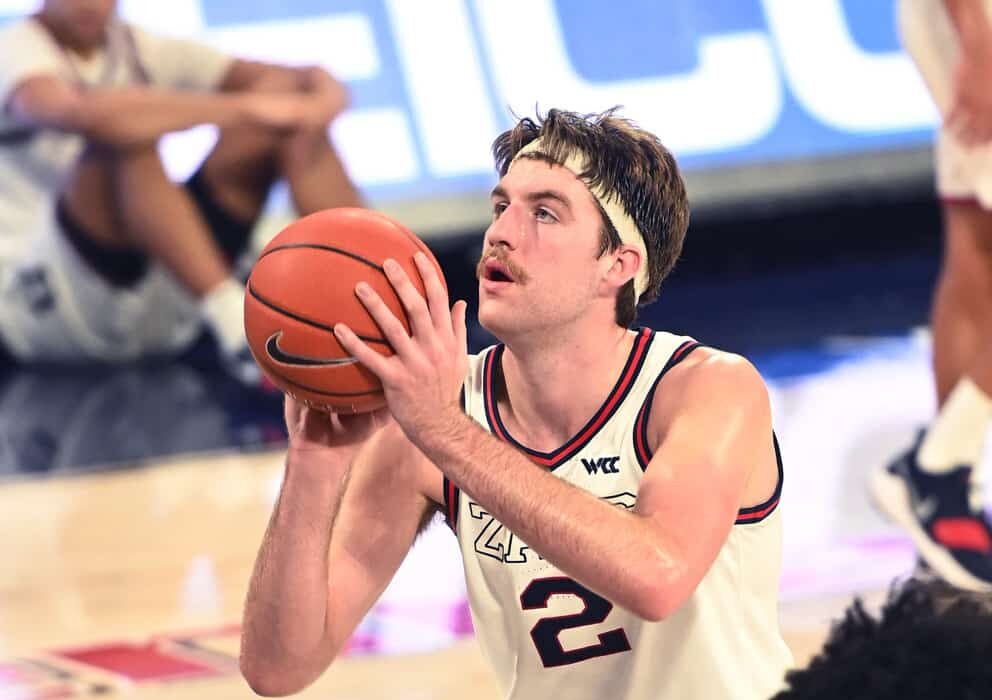 Nearly 14 minutes into Tuesday’s West Coast Conference Tournament final, Gonzaga trailed BYU by 12.  That lead would hold over the final 6 minutes of the half and stand as the largest deficit the Zags faced during the entire regular season. However, it’s what the screen showed at that 14-minute mark that was the most telling.

The lack of production from the sophomore and Wooden Award finalist was alarming, but perhaps not the scariest part of the line. What stood out the most was that Timme had only attempted two shots: a dunk and a missed layup. The ball was simply not getting to the Zags’ big man and is what was at the center of their woes for the early part of the night. The defensive scheme combined with the play of BYU center Matt Haarms had rendered Timme ineffective, and they seemed to have no answer.

It’s not that Gonzaga doesn’t have people to pick up the slack in these instances. It does in droves. Corey Kispert is Gonzaga’s best hope for a player of the year. Freshman Jalen Suggs is a likely lottery pick in the NBA Draft. Even Joel Ayayi and Andrew Nembhard are averaging right around 10 ppg. The difference is in the way the floor works around Timme. While it is Suggs that brings the ball up and leads the team in dimes, the offense is opened up by Timme.

The threat of a true big man playing an often traditional post game frees up the Gonzaga shooters. Teams have no choice but to collapse down on Timme when the ball is in his hands. Without doing so, the jump hook is money and he can blow right by most single defenders for the easy buckets. On the off chance that the shooters are on the cold side, as they were Tuesday, Timme’s field goal percentage is the highest on the team at over 65%. So when they need a basket, he’s the person they play through. So when he wasn’t even getting the ball to scare off other teams, they suffered. This is really at the core of what’s most important for the Zags when they see more dangerous teams in March Madness.

Gonzaga’s Recipe for a Late Run

If you look at every recent national champion, each has finished in the top three of adjusted efficiency margin (stats from KenPom). This seems to make sense in the most obvious way. The teams that are the best at scoring points, and limiting their opponent’s scoring, win games. Not brain surgery there. Gonzaga is currently ranked #1 in those rankings heading into the tournament. While this bodes well for them, the ability to keep that going will determine whether they reach the ultimate goal. And again, that all goes through Timme.

Again, while Kispert and Suggs might be getting the national recognition and the views from the scouts, a lot of this efficiency is due to Timme. Using Sports-Reference‘s player efficiency rating (PER), Timme has contributed the most, by far, to the success of the Zags. Sure, he logs fewer minutes than some of the others. However, his productivity when he is on the court leads him to his 32.1. That’s good enough for 5th in the country and is behind only Luka Garza from a contending team. Nobody else on the Gonzaga roster has a PER over 26.8 (Kispert sits at that number with Suggs at 24.0 and Ayayi at 21.3).

Although this just seems like a lot of numbers, the statement is clear. Efficiency (not defense) wins championships. And with one of the most efficient players in the game, Gonzaga has as good of a chance as ever. That is just as long as they keep dialing up Timme time.