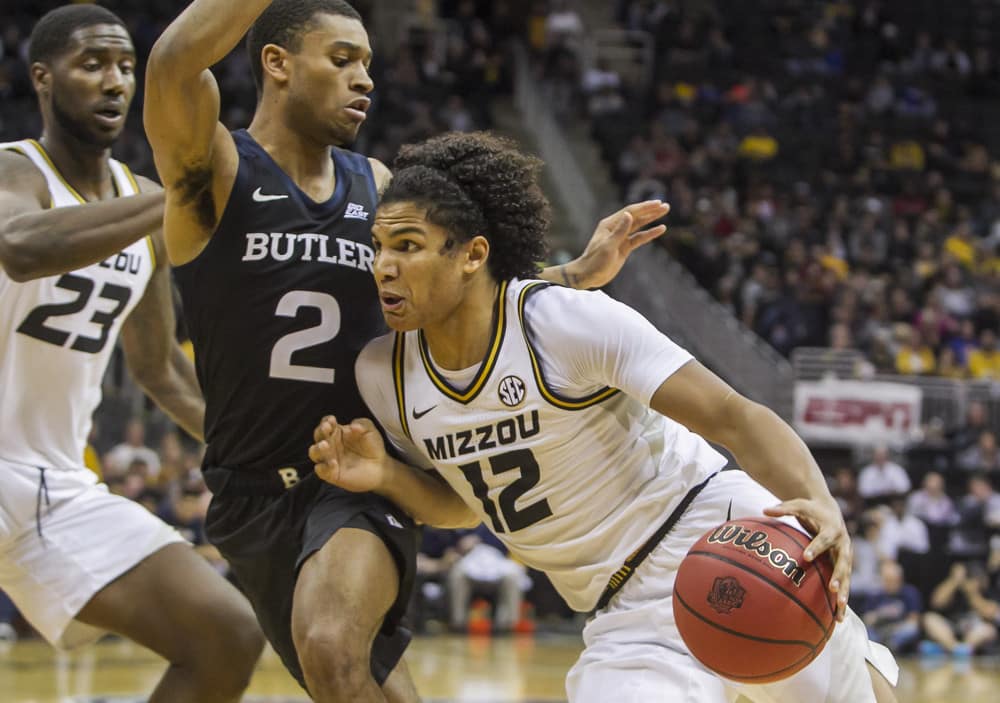 Welcome back DraftKings College Basketball fans.  It’s March!  With all due respect to Christmas, the most wonderful time of the year is actually these next few weeks.

The smaller leagues have begun their conference tournaments while the big boys are wrapping up the regular season this weekend.  Let’s jump in and play some DraftKings College Basketball DFS.

Here are the plus and minus matchups for Saturday and Sunday plus some targets for the early Saturday DraftKings College Basketball slate. Reach out to me on Twitter (@NC__NicK) for thoughts on the other weekend slates as they become available on DraftKings

Duke @ North Carolina: The Tarheels won the first matchup 91-87.  The rematch in Chapel Hill should be another high-scoring, instant classic.  Best rivalry in all of sports, if you ask yours truly.

Alabama @ Georgia:  Bama won the first matchup in Tuscaloosa, 115-82.  Almost 200 points were scored!  Bama may not clear the century mark in this one, but Georgia’s production should be improved at home.  Expect another shootout. Two top 15 teams in the country in tempo.

Indiana @ Purdue: if you enjoy a slow tempo Big 10 slugfest, this is your game.  Somewhat surprisingly, Purdue dropped 81 on the Hoosiers in the first game.  I expect a lower scoring game in the rematch.

Villanova @ Providence:  Villanova’s season took a turn for the worse with Colin Gillispie recently tearing his MCL.  I’d steer clear of Wildcats until we see how the offense performs without their senior leader, especially on the road against a physical Providence squad.  The Friars were only able to muster up 56 points vs Villanova in the first matchup this year.

You have to roster guys going against LSU especially when the Tigers are on the road.  My choice this weekend will be Mizzou’s leading scorer, Dru Smith.  Coming off a game where Smith put up 48 fantasy points, he should be ready to roll against this lackluster LSU D.  His name might sound like he’s an R&B singer, but this guy can ball. 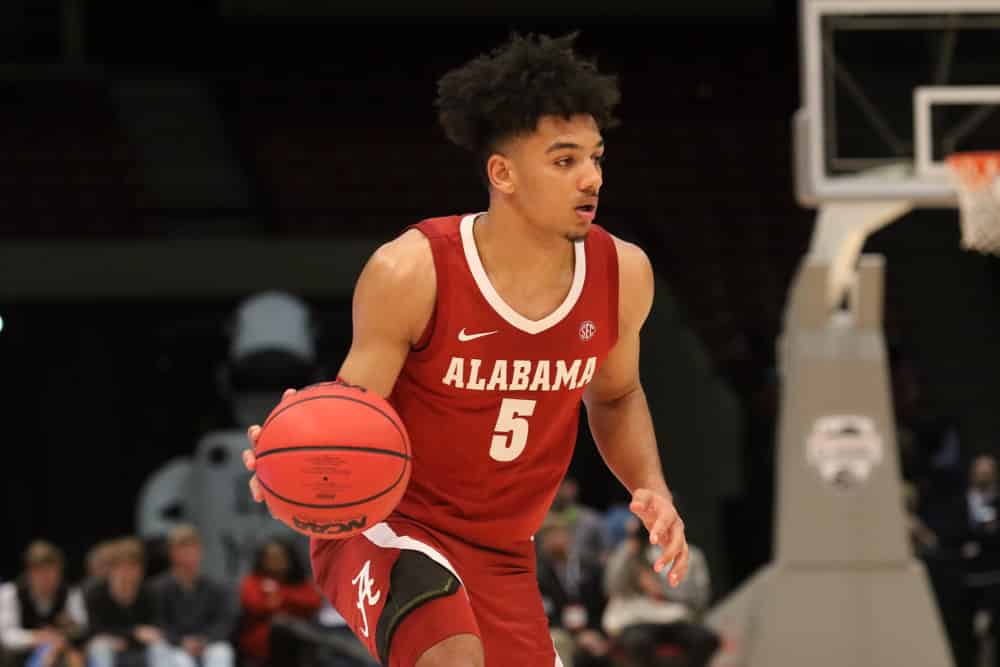 As mentioned above, the last time Alabama played Georgia, they dropped 115 points on them.  That isn’t easy to do in 40 minutes of basketball.  Bama’s got a lot of attractive options, but for my money, I’ll take Jaden Shackelford.  His relatively low price allows me to spend up elsewhere.

We’re diving in deep here and looking for a cheap play.  Hunter Jr is coming off an awful game vs Wisconsin where he only scored 2 points on 1 of 5 shooting.  Hence the cheap price.  However, he’s a veteran guy on this Purdue roster and actually leads the team in minutes played.  Prior to the game vs Wisky, he put up double digits fantasy points in five straight games.  Expect a bounce back here.

Some people have compared RaiQuan Gray’s game to what Draymond Green did on the court while at Michigan State.  He scores, rebounds, plays defense, and is an excellent passer.  Furthermore, we can roster him on Saturday at his lowest price in weeks.  The bargain price is due to his last outing where FSU blew out Boston College and rested their starters.  It’s a juicy matchup on Saturday vs Notre Dame.  Let’s just hope the Fighting Irish can keep it close.

Five straight games north of 25 fantasy points for the diaper dandy from Pontiac, MI.  It’s been an up and down year for Kentucky and all of their freshmen, but Jackson is putting it together.  The Gamecocks won’t have an answer. 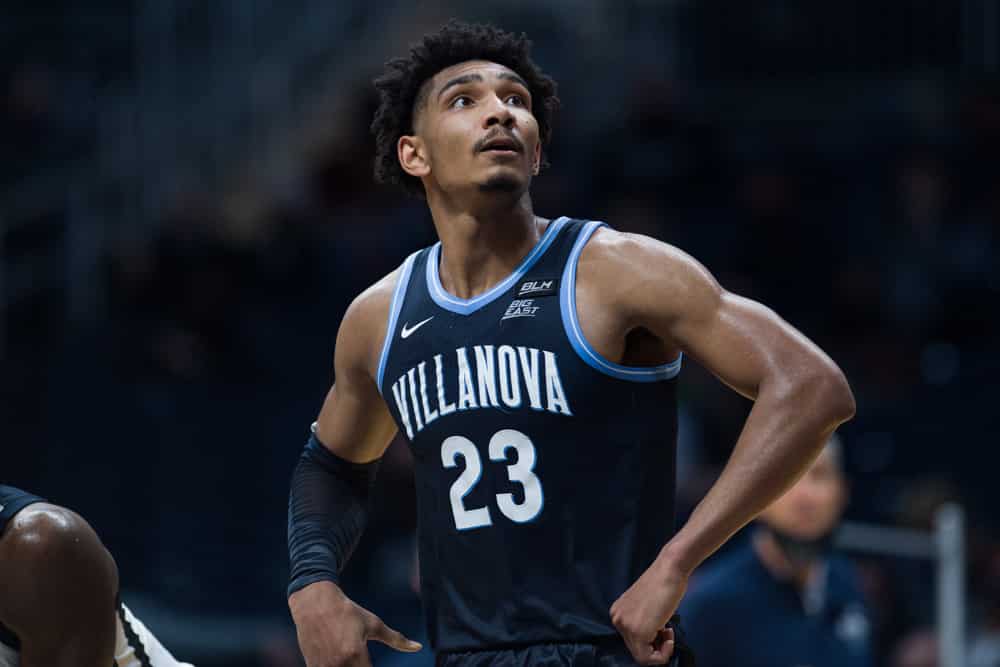 Samuels does a little bit of everything for Villanova and will be called on to do even more with the injury to Gillispie.  Earlier in the week against Creighton, he was on the court for all but one minute.  Samuels put up 32 fantasy points against Providence earlier in the year in a game where he saw 31 minutes of action.  It sounds simple, but more minutes usually equates to more fantasy points.

Minnesota’s team is riddled with injuries.  Over the last few games, the Golden Goperhs have been down at least two starters.  In their absence, Tre Williams’s playing time has increased and the sophomore from Dallas just posted the best game of his young career.  In a loss to Penn State earlier in the week, Williams registered 29.8 fantasy points.  Consistency may be an issue but let’s see if this guy can string together a few nice performances. I’ll bit at such a cheap price.

Wisconsin @ Iowa: This will be a contrast of styles.  Iowa is the offensive juggernaut while Wisconsin wants to bleed the clock and limit possessions.  Especially playing at home, I have no problem grabbing a Hawkeye or two.  Plus, as I’ve been saying all year, it’s been advantageous to roster guys playing against Iowa.  Badgers like Trice or Davison aren’t bad options.

Texas Tech @ Baylor:  It’s rare to find a matchup between two top 25 defenses in this section of my column, but it’s a limited slate on Sunday.  Baylor won the first matchup 68-60 back in mid January.  I expect both teams to be in the 70’s in the rematch.

Penn State @ Maryland: Stay far away from this game.  The Nittany Lions got the best of Maryland in State College back on February 2nd, winning 55-50.  As the score indicates, it was an ugly game where both teams combined to only shoot 33.3% from the field and 20% from three.

Texas @ TCU:  In general, stay away from TCU guys especially when facing a team with a top defense, like Texas.  Meanwhile, the Longhorns have such a balanced offensive attack, it’s hard to trust any of their players from a DFS perspective.  Chances are I won’t have a player in this game in any of my lineups.