The American Express Picks and Props 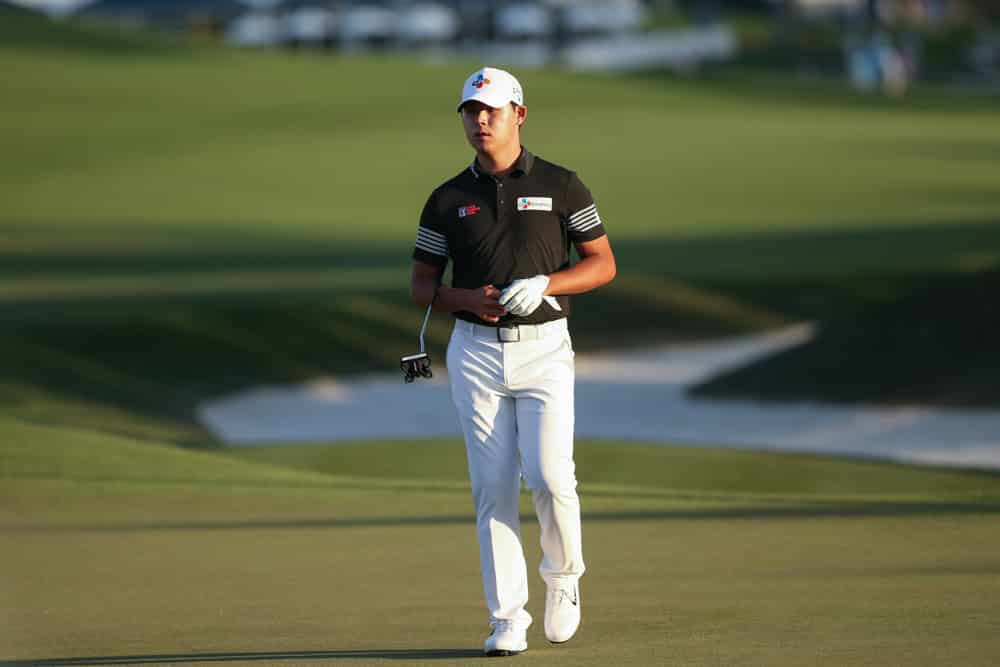 For those who missed it, check out the American Express Gambling Preview and Strategies for the types of golfers you should look to target for your picks. Using that as a guide, here are some of the best bets to make this week.

A lot of buzz surrounds favorites like Patrick Reed, Patrick Cantlay, Scottie Scheffler and Abraham Ancer for outrights this week. A player who is statistically the best ball striker in the field who isn’t getting that same buzz is Russell Henley. The move to the Stadium Course for three rounds should help separate better ball strikers from the rest of the pack. While not as demanding as its sister course in the East, the Stadium Course still requires solid, accurate ball striking tee-to-green. Russell Henley excels in this category. The golf course has also allowed players who don’t show well in the putting statistics to still win. The last five winners of the American Express finished outside the Top 100 in Strokes Gained – Putting in the season that they won. Henley is overdue for a victory with the form he’s shown.

For years, Emiliano Grillo’s putting was a major liability in his game. But over the last few months it hasn’t been as much of a burden. While he doesn’t put up flashy numbers on the greens, it’s not nearly as devastating as what it used to be. Over his last four tournaments, Grill is actually gaining 0.14 strokes per round putting on the field. It’s also noteworthy that his lone win on the PGA Tour came on a Bent/Poa mixed putting surface, which is what he’ll putt on at the Stadium Course for three rounds. With that part of his game relatively in check, he can use that with his fantastic ball striking to come away with his second career win.

Last year at the American Express didn’t go so well for Si Woo Kim. Si Woo carded an opening round 87 at the Nicklaus Tournament Course before sheepishly withdrawing from the tournament. Si Woo’s form has tremendously improved since then, and he’s one of the more balanced and well rounded golfers in the field. He also has a good track record on the Stadium Course and should benefit from three full rounds of play in this year’s event. This year looks to go a whole lot better for him, which hopefully will lead to a long overdue win.

Sepp Straka checks a lot of boxes of a contender this week. He’s a really solid ball striker, especially with his irons. He also does a nice job combining length and accuracy off the tee. It’s also an added bonus that he’s a solid putter, something that isn’t a prerequisite at the golf course. That’s part of the reason why he showed very well at the American Express last year. Straka has had several close calls at a victory in his young career. This could be the week he finally breaks out.

Doc Redman is a very popular name this week for betting and DFS. But his 110/1 price here is too good to pass up. Redman is destined to be a PGA Tour winner and now’s the time to jump in on him. He’s a fantastic ball striker, especially with his irons. And he’s a very good driver of the ball to keep it in play. Redman will win soon, and this could the the week he does it.

Hoge missed the cut at the Sony Open, but it was due to a poor putting performance. Hoge struck it well tee-to-green at the Sony Open by gaining about 1.25 shots per round. He has a good track record at the Stadium Course and is a solid ball striker overall. He’s a nice sleeper bet to win the American Express.

Since the American Express adopted the Stadium Course in its rotation, the former winner hasn’t had very good showings. But it isn’t because of his performance on that golf course. In five rounds at the Stadium Course, Reed has gained 2.1 shots on the field. His success there is largely attributed to his strong putting and good wedge play. Shifting three competitive rounds to the Stadium Course will help him to a good finish on the leaderboard.

Through two tournaments, Ancer hasn’t been able to get things quite right. Ancer putted great at Kapalua but struck the ball poorly. He struck the ball great at Waialae, however a poor putting performance led to a missed cut. He’s close to putting it all together, and it could happen at a golf course he has a good history at.

Everyone is out on Rickie this week. In fact, it is exactly one year ago this week that he last recorded a Top 10 on the PGA Tour. Fowler’s form was dreadful in 2020, mostly attributed to swing changes that had not begun to take. Rickie will play for the first time in about a month and a half, and a lot could have changed over that timeframe. No one truly knows the state of his game but him. And at 33 years old, he’s probably not washed up. He also has a pretty good track record in this event overall. Rickie’s unpopularity is reflected in his depressed odds this week. Betting him on a Top 20 prop is a good jumping off point to see if he’s starting to round back into form.

Other Top 20’s to Consider:

This is the first event for Ryan Moore of the 2021 season, but he has a lot of the characteristics needed to play well. Moore is a steady and consistent ball striker who excels with his wedges. It also helps he’s a decent putter too. As for Kizzire, he’s played very well over the last few months. However, those showings have come on straight Bermuda golf courses. While PGA West is “technically” a Bermuda golf course, it’s will play very differently than one. The Bermudagrass is dormant this time of year, and the fairways and greens are overseeded with Perennial Rye and Poa. Tee-to-green it’ll look and behave more like a Bent/Poa golf course. He also is coming off one of his better ball striking performances in recent memory and had a great putting week. Both are at risk to regress to the mean. Moore should beat Kizzire head to head in this coinflip matchup.

The praise for Redman is above. As for J.T. Poston, he typically excels on straight Bermuda golf courses. But like Kizzire this isn’t a track he’s typically known to fare well in. Poston has also struggled badly with his ball striking and needs great putting performances to boost his chances. Poor ball striking won’t cut it at the Stadium Course this week. Redman should beat Poston head to head.

The praise for Hoge is above. As for Wyndham Clark, he’s a bomb and gouge specialist who can get hot with the putter. Those aren’t the keys to success at this event. Possibly related – Clark has lost 0.4 strokes per round to the field in his career there. Hoge should beat Clark straight up.