Welcome back College Football DFS fans. We had a very nice week 11. Hopefully you are following along with the weekly column and weekly podcast that drops Friday morning. Remember, the column covers the main Draft Kings afternoon slate while the podcast (which can be found on The College Experience) also touches on the Friday and Saturday night slates.

It’s this podcast where last week @TheColbyD shared a lineup that nearly cashed 10K. He had to settle for a measly $275.00.  Boo hoo.

How about we try to win some more money this weekend?  Let’s do this!

At the risk of being repetitive, I will once again highlight Justin Fields as my big money man in the afternoon slate. Plus, his game got cancelled last week so I was unable to roster him. For some reason, he’s actually $1.2K less expensive than last week and to my surprise, there’s four QB’s who cost more. As the 5th most expensive, you aren’t breaking the bank and your are getting guaranteed production.

The Buckeyes welcome the Indiana Hoosiers into the Horseshoe on Saturday in an unlikely battle of top ten teams. Sure, Indiana is playing good football but they did let Michigan’s Joe Milton throw for 344 and 3TD’s a couple weeks ago. Plus, if Indiana can keep the game within reach, the Buckeye’s offense will have to keep their foot on the gas.

In his first start against Penn State last week, McCaffrey cleared 21 fantasy points behind 150 yards and a TD in the air and another 67 yards and a TD on the ground. Not bad, but not great. The reason to be high on the Cornhusker signal caller this week, is the juicy matchup vs Illinois. Plus, he should be even more comfortable in his second start.

The fighting Illini’s defense hasn’t been putting up much of a fight this year. Opposing teams are averaging almost 35 points a game. Wisconsin’s Graham Mertz threw 5 TD’s against Illinois in the opener. That performance was followed up by Purdue who threw for over 370 yards and 2TD and Minnesota who ran for over 300 yards and 5TDs. McCaffrey is a dual threat and this Nebraska offense will look the part come Saturday.  Here’s some highlights of what they were able to accomplish against PSU.

The Saturday afternoon slate is absolutely loaded with top QB’s. I’d recommend spending up for the position this week. However, if budget constraints have you down, you could take a gamble on K St’s freshman QB.

Thrusted into the starting gig after Skylar Thompson went down in the Texas Tech game, Howard has played some solid football. As one may expect from a true freshman, he has been inconsistent and at this point he’s more dangerous with his legs than with his arm. Last week, in his best game to date, Howard ran for 125 yards while putting up over 29 fantasy points on a solid Ok St defense.

I don’t love the play and I don’t love the matchup vs ISU but at this rock bottom price, he could pay dividends. Anything north of 20 fantasy points, and I’d chalk it up as a successs.

Sometimes you just have to pay up. There’s a reason why the Iowa State RB is the most expensive player on the board this week. In six straight games, Hall has scored over 30 fantasy points. Seven games in and the sophomore back is already over 1,000 yards and has 14 total touchdowns. That’s almost 150 rushing yards and 2+ TD’s per game. Plus, in the last three games, Hall had added onto his gaudy rushing stats by catching a few balls too.

Kansas State is a solid team with an above average defense but it appears Breece Hall is matchup proof. In fact, some of his best games this year have been against top tier opponents like 185 yards and a TD vs Okla State and 139 yards and 2 TD’s vs Oklahoma. Set him in your lineup and move on to the next position.

The injuries are starting to pile up for App State. A couple weeks ago, their starting RB Daetrich Harrington went down and will be out for a few weeks. In his absence vs Georgia State last week, Camerun Peoples got the majority of the work (17-67-1TD) and did more with his carries than Marcus Williams (13-22).

Also against Ga St, QB Zac Thomas went down and will be out this week. App State will rely on the ground game vs Coastal Carolina and Peoples should be the focal point. For a guy that’s only $5.3K, I expect a lot of volume. He’s got the talent and now’s he’s got the opportunity.

If you need to go real low for your 2nd RB or your flex spot, I’d recommended at least choosing someone on a dynamic offense that’s gonna put up some points. That’s exactly what we have in Gainesville these days. While it’s risky taking any gator RB, the price is certainly right for Wright and the matchup vs Vanderbilt is a bonus.

We all know Vandy is trash. UF will get up big and focus on the running game in the second half. On the season, Dameon Price has almost double the amount of carries as Wright and Malik Davis, but all three guys will get the rock. Last week, Wright turned his 9 carries into 50 yards and also caught two balls. The week before he didn’t do much on the ground, but he caught three passes for over 70 yards. He’s starting to prove himself as a playmaker.

Once again, I had Olave in this same spot last week before the Ohio State game got cancelled. If it’s not broke, don’t fix it. Stacking either Buckeye WR with Justin Fields is an excellent way to start building your roster. Olave is $300 less than Garrett Wilson this week so I’ll happily scoop up the JR WR who will be playing on Sundays next year.

Olave has back to back weeks with 2 TD’s a piece. Expect him to find the end zone again against vs Indiana.

Even though Fryfogle currently has a questionable tag, how can you not take a gamble on a guy who has 18 catches for 342 yards and 3 TD’s over the last two games? Obviously, you’ll have to monitor the injury report but if this guy plays, he will produce.

Yes, the Buckeyes have a nice defense loaded with talent, especially in the secondary, but Indiana will be forced to pass often. This is a nice price point for that kind of production the last couple of games. It’s clear Fryfogle has a great rapport with his QB and this Hoosier offense is doing things.  Check out Mr. Fryfogle for yourself: 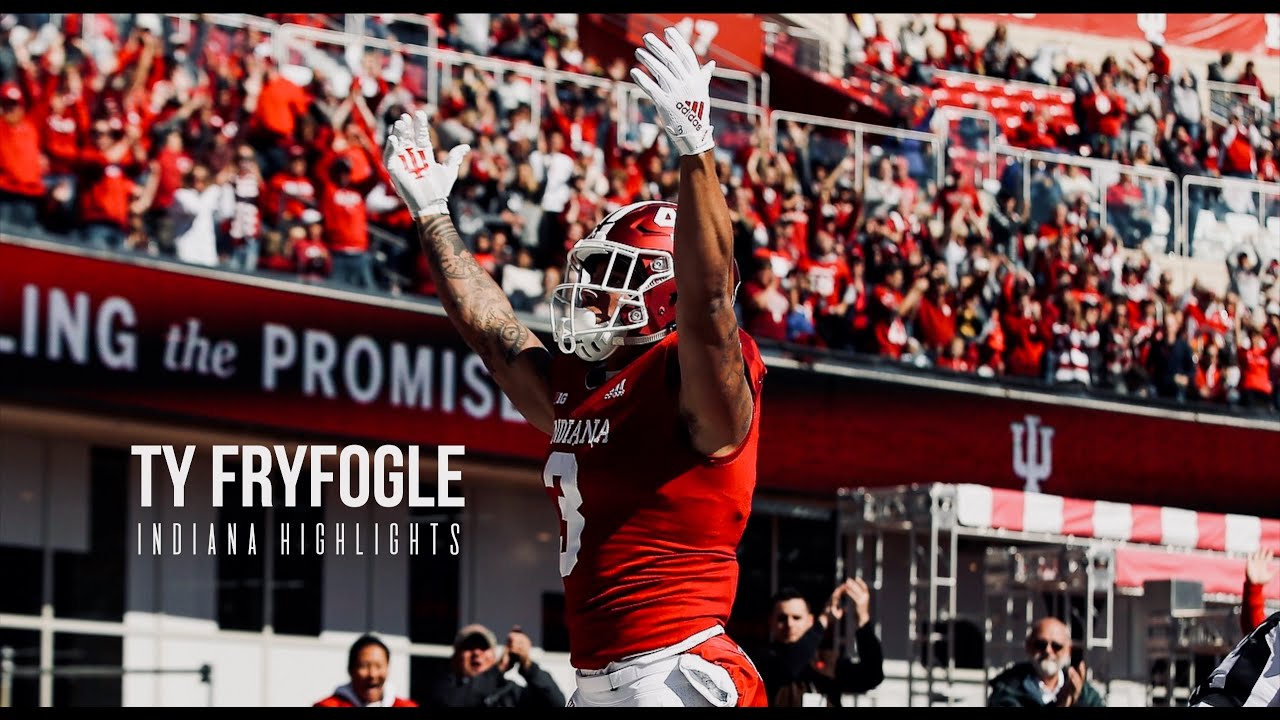 After a couple weeks off where Bolden surely got some first team reps in practice, perhaps he’s due for a big game against Kentucky. If not, maybe he’s destined for a career in the film business.