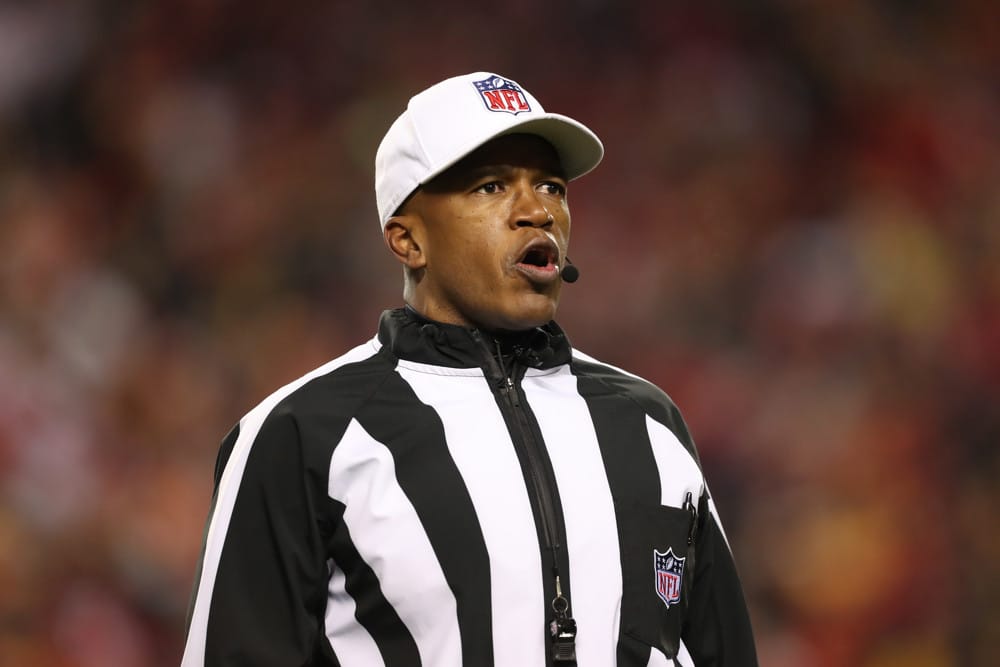 KANSAS CITY, MO – JANUARY 16: Referee Shawn Smith (14) explains the results of a replay review in the third quarter of an AFC wild card playoff game between the Pittsburgh Steelers and Kansas City Chiefs on Jan 16, 2022 at GEHA Field at Arrowhead Stadium in Kansas City, MO. (Photo by Scott Winters/Icon Sportswire)

NFL Week 3 is in the books and we are on to Week 4! Last week, the referee likes nearly swept the board. It felt short in the Sunday Night Football game where the 49ers dropped the game against the Denver Broncos by 1 point. Below I will highlight betting stats and trends that stand out in this week’s Week 4 NFL Referee Assignment! As a reminder:  these are trends and should not be your ONLY source for making your bets. Rather, an extra tool to help you handicap the games! Additionally, remember there are only a handful of referees who will have trends! 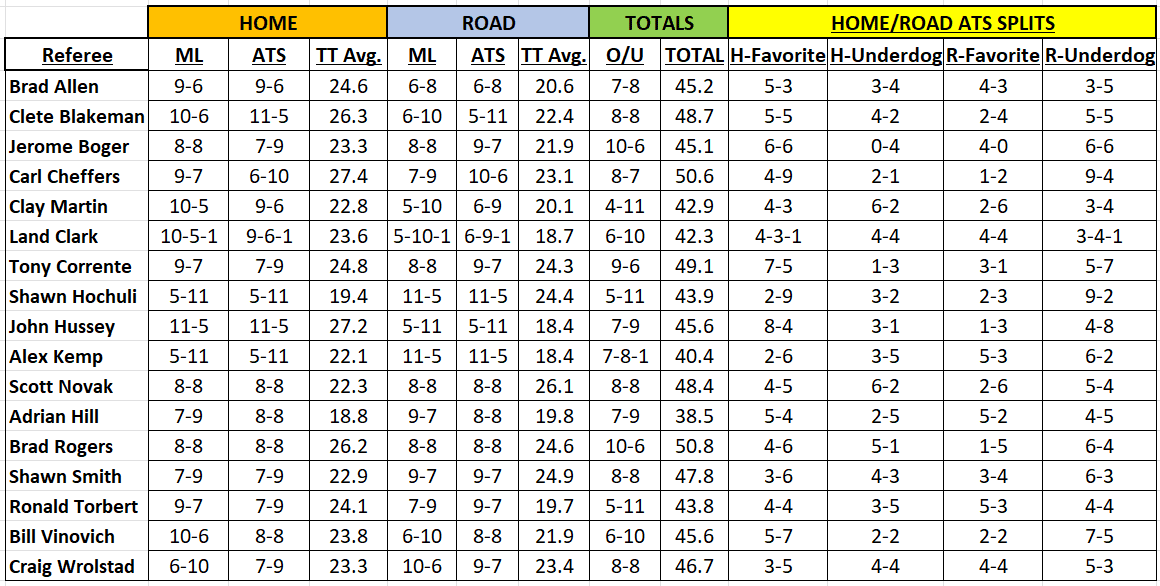 Above are the updated stats thru Week 3 of the season! Unfortunately this week Ron Torbert is not assigned to officiate a game. However, there are plenty of other referees I will highlight in this week’s NFL Referee Report! Let’s dive right into the action!

Tra Blake is the newest referee this season in the NFL. Thus far Unders are dominating in the NFL, it has been the contrary for Tra Blake. In fact, Blake’s officiated games are a perfect 3-0 to the Over. His games are averaging 50.3 points per game going over the total by an average of eight points per game! In Week 4, Blake is tasked with officiating his first primetime game on Thursday Night Football between the Miami Dolphins and the Cincinnati Bengals.

Clay Martin has been another referee who has been popular in the weekly NFL Referee Report and for good reasons. Last season, home teams ended up going 10-5 on the money line and 9-6 against the spread. Fast forward to this season, thru three weeks, home teams continue to find success. In fact, home teams since last season are now 13-5 on the money line and 11-7 against the spread. Last week, Martin officiated the Thursday Night Football game between the Steelers and the Browns where the Browns won and covered the spread.

This week, Martin is assigned to officiate the game between the Seattle Seahawks and Detroit Lions. Currently, according to the WynnBET, the Lions are 4.5 point favorite and -220 on the money line. Perhaps for parlay players, the Lions money line is something to consider as a parlay leg this week?

Last season, Shawn Smith was one of the more consistent referees. In fact, last season, road teams had a very slight advantage going 9-7 straight up and against the spread. Furthermore, the total was split with 8 over and 8 under. However, this season, the betting stats have changed. Thru the first three weeks of the season, home teams are a perfect 3-0 straight up and against the spread. Additionally, the Under is a perfect 3-0 in Shawn Smith officiated games. In NFL Week 4, Smith is assigned to officiate the NFC East matchup between the Washington Commanders and the Dallas Cowboys.

In last week’s NFL Referee Report I discussed Shawn Hochuli being trendy to road teams. Unfortunately, the 49ers did not live up to their side of the bargain and lost the Sunday Night Football game 11-10 and putting a small dent in the betting stats for road teams in games officiated by Hochuli. However, the Under trend continues to dominate in games officiated by Hochuli. Thus far, the Under is a perfect 3-0, and dating back to last season it is now 14-5! Now is not the time to get away from backing the road teams. The Week 4 Referee Assignment for Hochuli is in the Eagles game hosting the Jags!

Here are the Week 4 Referee Assignments: 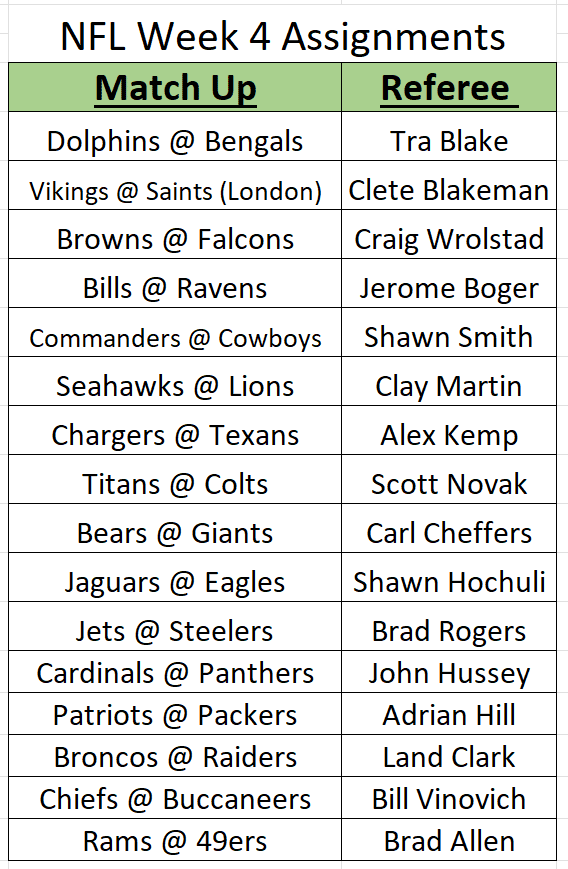