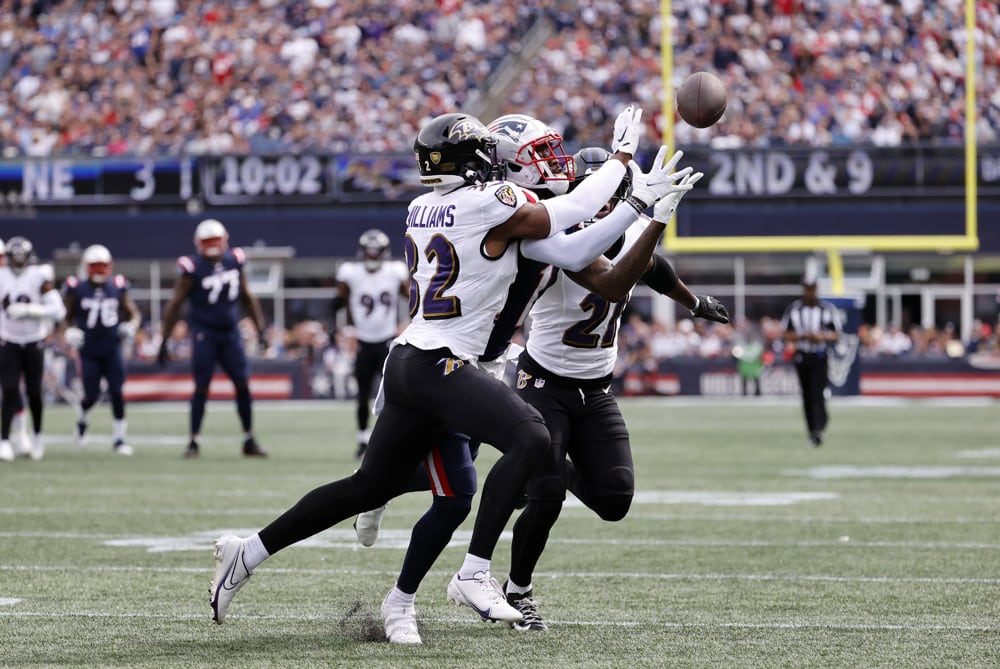 It was another exciting week in the NFL, but now it’s down to business again. So we’re right to our weekly Week 4 IDP fantasy football risers, fallers, pros, and regular Joes. Covering NFL locker room reports and any scenario changing in between. Or just passing on some of the in-house rumors and reports by the local beat writers. Whatever it is. If it’s NFL defensive player related, and could change the game somehow. It’s always going to be worth talking about IDP fantasy football footnotes.

If you’re one of the lucky ones or just took the flier on the Ravens signing Marcus Williams. You managers are the biggest winners so far. Because heading into the season, he has to be the biggest under-the-radar score. It’s weird how a change of teams can turn a player or position into something different. And that’s not normally ever the case, to be honest.

But so far. Williams is likely leading your league’s leading defensive backs in points. And it’s wild enough to think. He likely went undrafted with the Texans Jonathan Owens this past off-season. All while managers like me focused more on Chuck Clark and the rookie Kyle Hamilton in Baltimore. And in Owens’s case, the rookie Jalen Pitre, who also just blew up big this past weekend.

Let’s peek in at this production so far for Williams. And keep in mind, football fans, these contests weren’t all hot safety matchups. They were solid, and it’s more like Willaims took over and made them stronger. And so far, he’s recorded 21 solos, with six assists and one tackle for a loss. But the really big hitter, he’s added three interceptions.

But that’s not what his highlight really is all about. Because to a veteran IDP manager, all I can see is the 21 solos to six assists ratio. Those solos. For a defensive back, rack up more points we can rely on than the splash interceptions long-term. And right now. That’s what this big winner will have to maintain to continue being at the top of our lineups.

How lucky do IDP analysts think Myles Jack‘s managers got? Real, real, really lucky, that’s how much because he became an LB2-3 afterthought signing with the Steelers as soon as it was inked. And all because we all thought he was just playing the second linebacker role as Joe Schobert did in 2021. In which last year and previously didn’t amount to much. So this one, to me, is an underdog hit.

When no one expected Jack to carry over is prior, maybe even better. IDP production from Jacksonville with him. And now that we saw the snaps between him and Devin Bush for three weeks, it’s not even close. In all three contests, Jack is the main guy, and Bush hasn’t seen more than 50% of the snaps yet.

With T.J. Watt down, this may be padding his box score with extra opportunities. And that’s perfectly fine, and not a proven fact., yet either. All we know is at the bottom of his snap percentages, which is around 85%. He’s been a beast averaging around 12 combined tackles a contest, minus any splash plays, which has almost secured a lite LB1 status heading into the rest of the season.

Assuming, of course, Steelers head coach Mike Tomlin doesn’t pull something funny. Or decides that Myles Jack’s mediocre PFF grade doesn’t translate. And instead, he turns back to Devin Bush (poorer grade), whom we assumed to begin with he wouldn’t ever quit.

When Foye Oluokun was with the Falcons the last few seasons, he was a top 5 ILB target. Leading the IDP fantasy football field for his team and our box score production. It was also assumed by many he’s still the same guy as a Jaquar this year. But let’s discuss how we aren’t surprised he’s not leading Jacksonville right now. And pretty much lay out why he’s not what managers drafted him to be this year. The major point is the rookie Devin Lloyds made the biggest impact. But we’ll talk about Lioyd soon here, after finishing up Oluokun.

What I really like to point out is. It seems more often than not these days. That solid NFL IDP players turn a little sore after they sign with another team. At least players signed with more than intentions than needing a body to fill a hole. Like former IDP stud safety, John Johnson. When managers found out the hard way last year.

Or perhaps Anthoney Walker from the same team. He’s also an example from the year before Johnson. But either way, when we hear that a player was signed to run their defensive or even their secondary. We clearly have to start thinking about tempering our expectations. So they can learn, run, and conquer IDP production on their new team.

Good news, though, with this recent trend in the NFL. Year two, in their respected systems, has offered a glimpse into a few of them bouncing back. And this might be our better option if we’re sitting in redrafts.

Foye Oluokun replaces Devin Lloyd’s side, who is blitzing the QB… this was a fun blitz that pressured Herbert enough to get the job done. Jaguars linebackers are quick! pic.twitter.com/kwfcG5tNHA

Now let’s hit on the Jaguars’ Devin Lloyd. A high-profile NFL rookie we all figured would be productive. But mainly based on being drafted as an obvious starter. Yet, could we have guessed at this level? I dare to say not. Maybe it’s because they are picking on him instead of Foyesade Oluokun; who knows? Or who cares? Because of the kind of high volume production Lloyd provides. He could easily outscore his counterpart, Oluokun’s best career effort this season. And it’s not far-fetched either he’ll record a similar rookie season. Or even better than Shaquell Leonard and Devin White did in their rookie seasons.

We do preach consistency and its benefits all the time in IDP fantasy football. But once that is there to a higher degree, we can trust it. We then look at those splash play numbers and lean hard on grading at the same time. And as of right now, he’s almost graded elite by PFF, and I have to agree after watching more films.

He’s talented enough and locking down the base tackles we like. But it’s those added interceptions and passes defended; he’s got the last two weeks that stick out. That can carry him up and beyond what Leonard and White did during their rookie season if it continues. And the real trick then is figuring out the IDP averages. After all, Lioyd gets an extra game to try and do it in after they’ve added another game to the NFL football season.