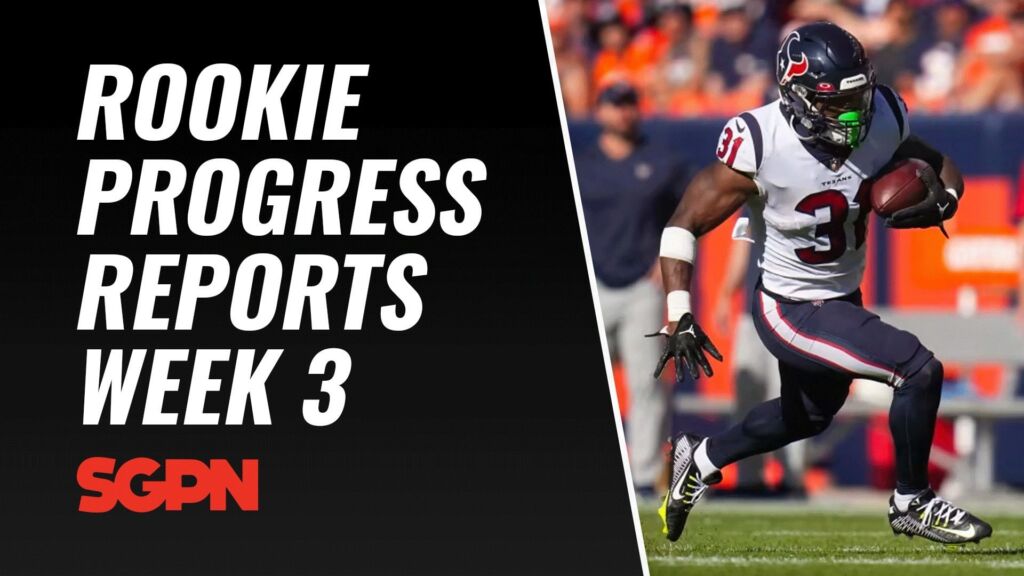 We are back with the SGPN Week 3 Rookie Progress Reports. The 2022 Rookie class has three weeks in the books, and we have been tracking their progress each week. We have seen some early fantasy football impacts from several rookies. We, unfortunately, have seen some struggles for some rookies. On a bright note, we have seen some steady progress. We had 2 Rookie Breakouts this week, and we have three rookies that have shown out each of the first three weeks. Let’s take a look at our Week 3 Progress Reports.

London has produced each week and is someone that you can comfortably start each week. Even in some tough matchups with questionable play at QB in a bad offense. London has looked like the focal point of this offense. London also looks the part; he looks like a true #1 wide receiver. Great job picking London, and have fun starting him this year.

Garrett Wilson broke out in a big way in Week 2 and was on pace for a repeat performance in Week 3. Wilson left for a short period of the game after taking a big shot to the ribs. The good news was that he returned and that he was able to finish the game. The bad news was that this did hurt his production in the second half. Wilson is another player that absolutely looks like he belongs. His route running is pristine, and some of his early films are just so fun to watch. This kid is going to be really special.

The opportunities have been there all season, and Olave has produced when given the opportunities. Jameis missed him on some big plays down the field a few times already this year, or we would be saying even more about Olave. His targets and his air yards are amongst the top of all receivers, and this week, he cashed him. Olave’s steady progression on receptions and yards is great to see. He is someone I would try to go trade for right now if I could; the touchdowns are coming. He’s the Champion of the Week 3 Rookie Progress Reports.

Speaking of touchdowns, Jahan Dotson already has three this year. Dotson has had a great start to the season and has played 87% of snaps or more in each game. This team runs a lot of three wide receiver sets. Dotson is on the field a ton. This week he had the most targets but had the least amount of receptions. This was a really tough matchup against some really tough corners out in Philly, and Wentz had a bad day. The Eagles sacked Wentz 9 times, and it seemed like he was running for his life the whole game.

Burks’ snaps continue to go up, but his involvement was way down this week. Burks looks good, and the Titans’ usage of him was very promising until this week. A down week definitely gives pause for some concern, but I still have a lot of confidence in Burks’ rest of the season. He may not be a regular starter in redraft, but Burks will have better days to come.

Christian Watson missed the Week 3 Rookie Progress Reports. He did not play this past week. Hopefully, he is able to get healthy and come back soon.

Breece Hall’s usage is maddening and concerning, to say the least. The biggest question mark is what it will look like when Zach Wilson returns. But, as of now, they are using Carter as the early-down back, and Hall is in on passing downs. Hall’s receptions have been the only thing keeping him from some abysmal performances. As a rusher, he is averaging seven rushes and 37 yards per game on the ground.

Ken Walker has had a slow start, mostly due to injury. Seattle is slowly getting him involved, but he was 3rd in snap shares this week. Penny dominated the RB snaps with 63.8%, while Walker only had 13%. DeeJay Dallas was out there for 21.7% of the snaps. Walker’s usage in the passing game continues to grow and could be his way onto the field right now. But, you will have to wait for production. Unless Penny goes down to injury, Walker is not close to starting.

Pickens had the catch of the week with a one-handed grab that was an instant highlight. That really has been the only highlight for Pickens this season. This offense has really struggled, and we can all hope to see a change at QB here soon. Pickens has been targeted down the field and has seen opportunities increase. But, the value of targets and the volume has not been enough.

Pierce showed a little something this week. Week 1 was really disappointing, and Week 2 was missed due to injury. Turning five targets into three catches and 61 yards was really nice to see. Pierce has 12.2 yards per target and 20.33 yards per catch. He was very efficient as they were using him down the field.

Everyone, including myself, said the sky was the limit. The floor was also a possibility, and it has gotten worse each week. Things are really looking bad for Moore right now. We can only hope, and you can’t trade him at this point. You might be able to buy, but to be honest…I am not sure what you are buying.

James Cook fumbled the ball on his first NFL snap. This put Cook in the doghouse, and we barely saw him in Week 1. In week 2, he got to play late in the game when the Bills were demolishing the Titans and resting their starters. Week 3 was not promising from a carries standpoint, but five targets is a sign of life. This is a great sign, hope to see more of it from Cook. But he is still #3 on the team as far as backs, and you can’t think of starting him right now. Even if you took him as a top rookie pick.

Whoooo!!! This was the breakout game we were looking for. We called it, and it happened, love to see it. This was the best rookie RB performance of the year so far. The only stain on it was the two fumbles, but Pierce looked good. Pierce always falls forward and has a knack for gaining extra yards. His opportunities continue to increase, and his production has followed. He is a solid RB2 rest of the season with a great schedule for the next few weeks.

Romeo, Romeo where for art thou thy Romeo. The hype train swelled for Romeo Doubs this offseason, only to have a disappointing Week 1. This got worse with less playing time and less production in Week 2. But, Week 3 was an absolute breakout performance. Romeo Doubs looks the part, and catching all 8 of his targets will earn some love from #12. The offseason rumors that he might be the #1 on the team are absolutely true. Trade for Doubs if you can; if you have him, you can start him.

Allgeier looks slow and indecisive as a runner. I know this is a bad offensive line, but there is a clear difference between him and Patterson. Damien Williams looked better when he was out there, and he will be back in a few weeks. Those who saw the situation and had high expectations for Allgeier are disappointed. Unfortunately, there is nothing that says this will get better. Keep him on the taxi and trade at any sign of value.

The Week 3 Rookie Progress Reports are in the books. Let me know if you want feedback on anyone else. There were a few more rookies that got some play on Sunday, but there really were not many other notable performances.