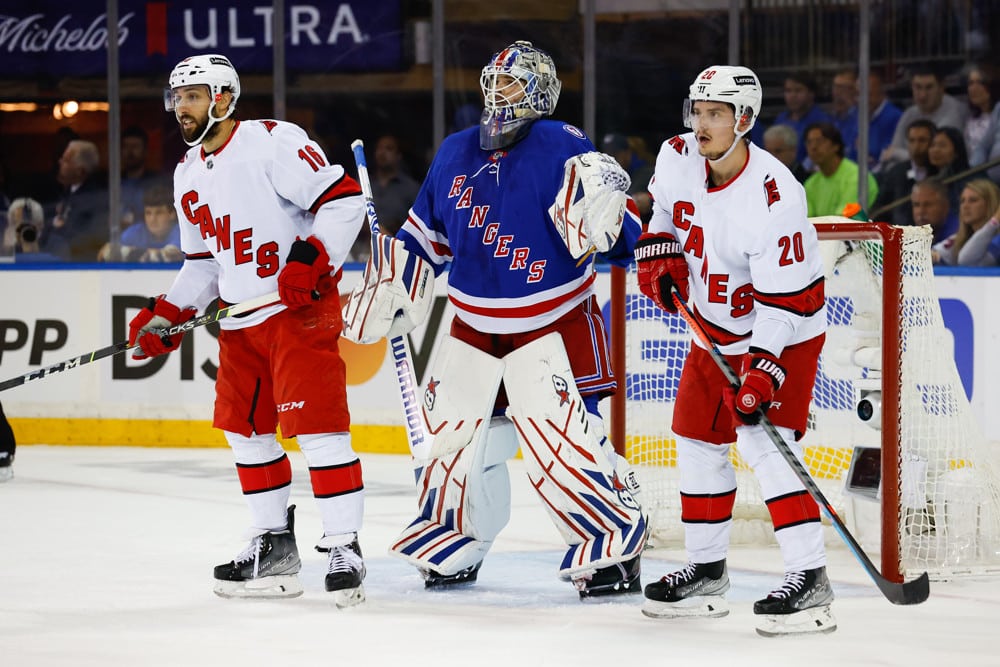 The 2022-23 NHL season is quickly approaching! The preseason is well underway and we’re less than 10 days from NHL opening night! We previewed the Atlantic Division on Monday, and the Central Division on Tuesday. We’re halfway through and conclude the two Eastern Conference divisions with the Metropolitan Division.

We’ll be going alphabetically with the Atlantic, Central, Metropolitan, and Pacific, allowing us to alternate between the East and West. For each division we’ll list the odds and give a favorite and longshot pick to win, then a few prop bets (to make/miss the playoffs, over/under points, etc.) at the end. Let’s continue with the NHL Metropolitan Division odds, picks, predictions, and best bets!

Carolina won the Metropolitan Division last season with 116 points (Rangers finished in second with 110 points) and the Canes only got better in the offseason. They replaced Vincent Trocheck and Tony DeAngelo with Max Pacioretty (injured), Ondrej Kase, and Brent Burns. On top of that, their young prospects in Martin Necas and Seth Jarvis should take a step forward. They also added Paul Stastny as a depth forward option after Pacioretty’s injury.

The Hurricanes have built a strong foundation over the past several seasons and they’re going to be a dangerous team in the NHL for the foreseeable future. They’ve shown that they can turn to pretty much anyone between the pipes, and having a talent like Frederik Andersen is a plus. Antti Raanta is a solid backup as well, as he’s proven over the course of his career.

Odds of +200 imply a 33.33% chance of happening. I think there’s a larger chance than that of the Hurricanes reigning supreme in the Metro again this season.

The Penguins may compete for the division but I can’t back them at only +280. However, there is another team that I may have my eye on.

The Rangers pushed the Hurricanes hard for the Metropolitan Division crown last season and have all the makings of a true contender.

Let’s start in the crease with runaway Vezina Trophy winner Igor Shesterkin. Shesterkin put up insane numbers last season, going 36-13-4 with six shutouts for a .935 SV% and 2.07 GAA. He can be a workhorse for the Rangers and they’ll ride him.

Next up is the defense with 2021 Norris Trophy winner Adam Fox, who is still just 24 years old, along with captain Jacob Trouba. Oh yeah, K’Andre Miller showed flashes last season, especially in the playoffs, and the 22-year-old blueliner looks primed for a breakout season.

Up front, the Rangers are led by Chris Kreider, Mika Zibanejad, and Artemi Panarin. They added Trocheck in the offseason and also have a group of young forwards looking to make an impact. Filip Chytil, Kaapo Kakko, and Alexis Lafreniere clicked in the playoffs and any one of them (or multiple) could finally break out this season.

The Rangers are deep at every position and deserve more respect than being +350 to win the Metropolitan Division. I’d also look at them at +2000 to win the Stanley Cup, and +1100 to win the Eastern Conference.

This might be my favorite bet across the entire league. The Philadelphia Flyers are a downright disgrace.

The Flyers went into this offseason with big aspirations of an “aggressive retool” and they came out of it looking like tools. On top of that, Sean Couturier is dealing with a back injury, keeping him out week-to-week, and Ryan Ellis isn’t expected to play at all. And those are just two of the many injuries that the Flyers are dealing with.

John Tortorella will get the most out of his team, but there isn’t a lot of juice to squeeze out of the Flyers. This line has dropped from 78.5 to as low as 73.5 on some books, so shop around for the best line.

The Flyers finished last season with 61 points and no longer have Claude Giroux. They got closer to 17 points worse than 17 points better.

The Islanders had a horrid road trip to start last season, which may have some thinking that they’re much better than last season’s 84 points. However, they also had an unusually hot stretch during the second half of the season. Those two things should balance out a bit.

More importantly, the Islanders did squat to improve their team this offseason. They were rumored to be in on Nazem Kadri and Johnny Gaudreau, but didn’t land either of the big fish. They locked up their restricted free agents to some good deals, but that was about it.

Take your pick between under 93.5 points or to miss the playoffs. The Hurricanes, Penguins, and Rangers should easily make the playoffs and the Capitals are above the Islanders as well. The Devils are a sleeper team to watch as well at just +140 to make the playoffs.