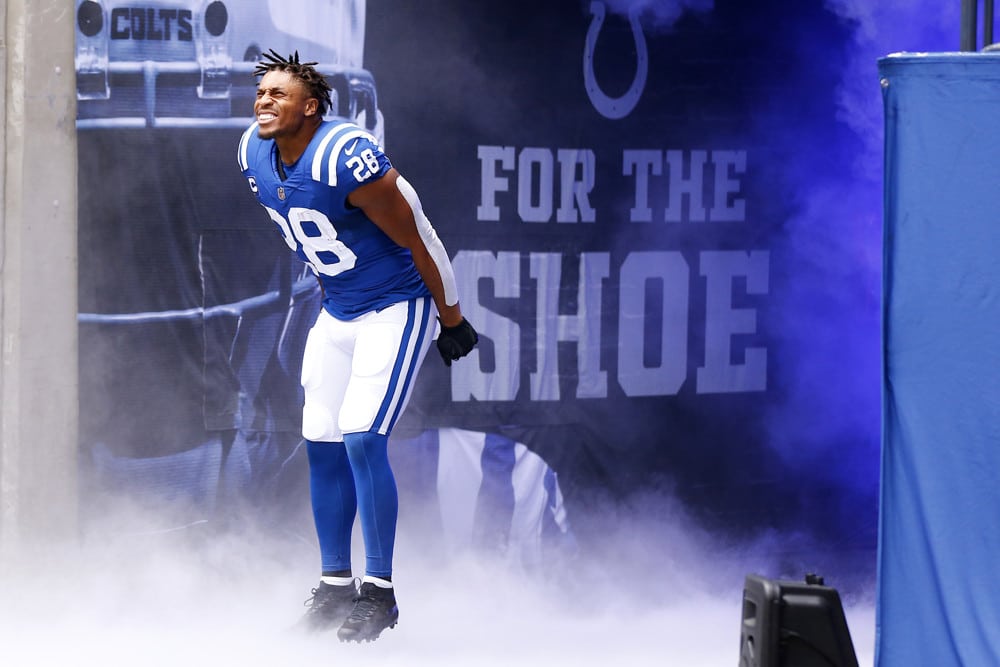 INDIANAPOLIS, IN – SEPTEMBER 25: Indianapolis Colts Running Back Jonathan Taylor (28) during player introductions at an NFL game between the Kansas City Chiefs and the Indianapolis Colts on September 25, 2022, at Lucas Oil Stadium in Indianapolis, IN. (Photo by Jeffrey Brown/Icon Sportswire). Fantasy Football Trade Value Chart – September Update

Three weeks of football have been completed, and you might be ready to shake things up on your fantasy football team. Whether it’s been a bad start to the season, or you just like to make trades on your way to building a dominant team that will last through the playoffs, we have you covered. Figuring player value isn’t always the easiest. However, our fantasy football trade value chart helps you gauge player values and gives you a starting point for making your trades. Or, use it like I do, and argue to your league mates why the trade your offering is a good deal.

What is a trade value chart, you ask? Our methodology takes FantasyPros Rest of Season Rankings and average points per game. After that, consider points above replacement level player and average draft position. Is that it? No, that’s not it! Finally, we tweak the numbers ever so slightly to make sure it all makes sense. This fantasy football trade value chart is different than the dynasty trade value chart that you can find here. One of the main differences is this solely focuses on fantasy output and change in value, rather than age, as the dynasty chart heavily considers.

He and third-place quarterback Lamar Jackson both have extremely high rushing ceilings that attribute to their high fantasy football point values. Despite still being a great quarterback, Patrick Mahomes takes a step back, only averaging 23.4 fantasy football points a game, 11 behind Lamar Jackson. There’s a three-way tie at fifth between Justin Herbert, Kyler Murray, and Joe Burrow.

Arguably the most important position in fantasy football, the running backs are currently led by Jonathan Taylor. While he’s started the season after three games as the 10th-ranked running back, he has the offensive line and the skill to hold the most trade value right now. However, Christian McCaffrey is tied with him, showing when healthy, he’s still one of the best running backs in the league. Behind them is Derrick Henry, who is getting back on track to finding the end zone often every game.

Fourth on the list, Saquon Barkley is making a great comeback and fitting Brian Daboll’s system very well. Fifth on the list, even though he shares the workload with Kareem Hunt, is Nick Chubb. The Browns run the ball more than most teams and Chubb is averaging at least a touchdown a game.

Behind him, the two tied at the top of the dynasty trade value chart, Justin Jefferson and Ja’Marr Chase are tied at third. Even though their young age doesn’t help them as much on this chart as it does the dynasty, they continue to put up good numbers keeping them in top five. Fourth on the list is Davante Adams, who has cooled since Week 1 when he had 49% of the target share but is still one of the most talented wide receivers in the league.

Tight end is the slimmest position on the fantasy football trade value chart because so few of them hold much trade value. However, the top player on the list, Mark Andrews, holds good value as he continues to put up big yardage and catch totals. His value in PPR leagues is especially high. Second on the list is Travis Kelce, who remains Patrick Mahomes’ favorite target.

Third is Kyle Pitts, who is still fighting to put up good touchdown numbers but showed in Week 3 how he can dominate in the passing game and rack up yardage and catches. Fourth is another Raider, Darren Waller. Waller hasn’t had the same start as we would have expected, but as Adams, Renfrow, and Hollins draw more attention, more should open up for Waller. And tied at fifth are Dallas Goedert and George Kittle. Kittle will continue to drop if he doesn’t start putting up more points, but he’s still a top talent in the league and holds a lot of value because of it.