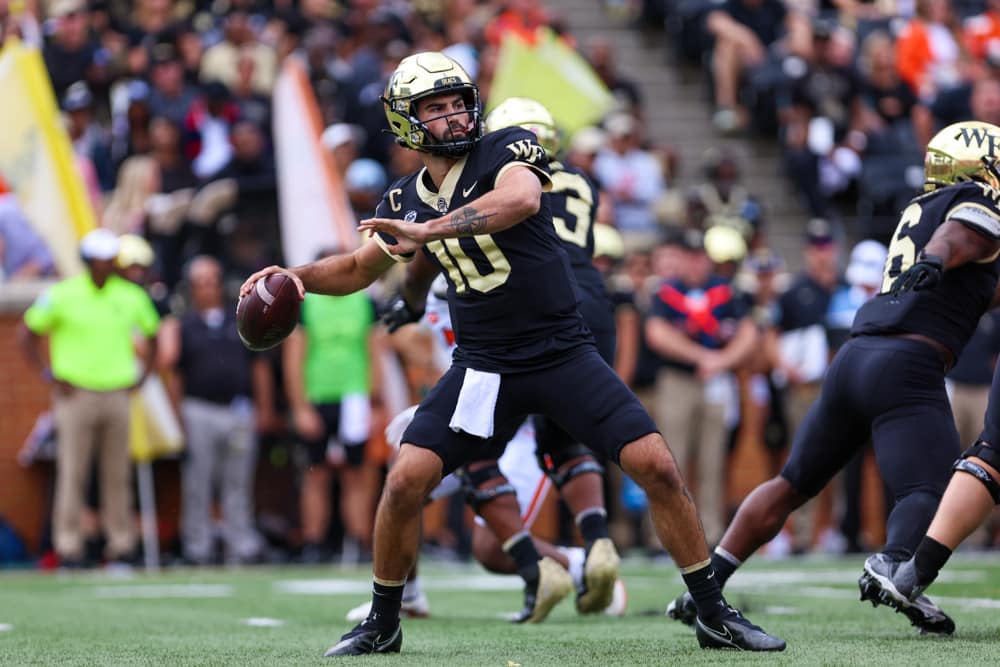 We’re back for Week 5 College Football DFS. Hopefully the pending hurricane about to hit the South East doesn’t affect the college football world too much. This week, more than others, you’ll want to pay attention to the weather report for games that could be impacted. With that said, lets jump into it.

Here are my targets and fades for each position for the main slate this weekend. Remember to tune into our podcasts where we’ll cover every slate over at The College Football Experience.

Bryce Young – Alabama ($9.9K) he’s the most expensive QB on the slate but the Tide passing attack should be in store for a monster outing vs Arkansas this week. The Razorbacks are currently the 126th ranked team stopping the pass. Missouri State even threw for 350+ vs Arkansas. If there’s ever a week to spend up on the reigning Heisman winner, this is it. Last year, he threw for 559 yards and 5 TDs in this matchup.

Sam Hartman – Wake Forest ($8.4K) Hartman just put up over 40 fantasy points on Clemson. I think it’s safe to say he’s fully healthy and this Wake Forest O is ready to crank out the points. Hartman is a bargain at this price.

Jalon Daniels – Kansas ($7K) Yes, I list Daniels here every week. Why would I not? The Jayhawk QB now has B2B 45+ fantasy point performances. I understand that Iowa State has a better D than Duke but Daniels is $900 less expensive than last week. DK still not giving him any love!

KJ Jefferson – Arkansas (6.7K) the flip side of the Bryce Young play would be Arkansas’s QB KJ Jefferson. Through 4 games, all he’s doing is averaging over 30 fantasy points per game. Last year, on the road at Bama, Jefferson threw for over 300 and 3 TDs.

Will Rogers – Miss State ($6.6K) Rogers and Miss St had an awful game a couple weeks ago vs LSU which has dropped his price $2.4K from Week 3. The matchup this week isn’t great either but he still threw for over 400 with 3 TDs vs the Aggies last year. He should never be priced this low.

Adrian Martinez – Kansas St ($7.8K) after a monster 55+ point fantasy performance, we see Martinez’s price go up $2.1K from last week. The Nebraska transfer has never majored in consistency so it appears rostering him this week is chasing last week’s points.

Braelon Allen – Wisconsin ($8.7K) Allen’s price is spiking but if you are looking for a top dollar RB this week, he’s your guy. The matchup isn’t great but this is a straight volume play with a ton of upside.

Deuce Vaughn – Kansas St ($7.2K) Mighty mouse might be my favorite RB in the country and after two quieter games, the time is right to roster Vaughn. Even though Deuce ran for over 100 vs the Sooners, he hasn’t found pay dirt in two straight weeks. Let’s say it all together – “positive TD regression candidate”.

Quinshon Judkins – Ole Miss ($5K) I’m a big Zach Evans ($6.9K) fan but it’s been Judkins pacing the Rebel RBs in carries of late. Over the last two games, Judkins is averaging 23 carries for 119 yards and 2 TDs per game.

As a a follow up, I put together 14 of Ole Miss RB Quinshon Judkins’ 📈 runs from the freshman phenom’s 140-yard, 2 TD performance against Tulsa.

Just four games into his collegiate career, Judkins has already flashed many of the tools ⚒️ I look for in an NFL RB prospect. https://t.co/oLCYbkJfmt pic.twitter.com/9II7HPibym

Jirehl Brock – Iowa State ($5.4K) At only $4.9K, Brock found himself in my column a week ago and responded with a solid 24 fantasy point performance. At only a few hundred bucks more, I find no reason to not roster him again vs a weaker Kansas D.

Richard Reese – Baylor ($4.9K) I had Reese on this list last week as well and while the true freshman didn’t have the most efficient game vs Iowa St, he still got 20+ carries and found the end zone. It’s possible that Taye McWilliams returns this week but Reese appears to be the top dog at this point.

Raheim Sanders – Arkansas ($6.1K) I believe in his talent but not the matchup. Sanders was quiet vs A&M last week and now has Bama this Saturday. His price has been lowered accordingly but I’ll choose to spend my coin elsewhere this weekend.

Xavier Hutchinson – Iowa State ($7.8K) All Hutchinson does is produce but for some reason taking anyone from the ISU passing attack seems like an unsexy pick. Don’t let that deter you. Hutchinson has caught at least 8 balls each game this season and is one of the safer bets for production.

Xavier Hutchinson at the half:

Charlie Jones – Purdue ($6.4K) Obviously, if Aidan O’Connell is out, the Purdue passing game suffers. However, Jones still caught 9 balls and 2 TDs last week with the backup QB under center. Jones was $8K two weeks ago. I get reducing his cost some but a $1.6K drop is too steep.

Ja’ Corey Brooks – Alabama ($5K) there’s a lot of mouths to feed on this Bama passing game and we’re waiting for a WR or two to separate themselves from the pack. Brooks caught 6 for 117 and 2 TDs last week vs Vandy and it was before the game got out of hand. We might be on the verge of something.

Caleb Ducking – Miss St ($4.7K) the matchup vs A&M isn’t great but if you believe in the Miss St passing attack, you can get the team’s leading WR for less than $5K. That sounds appealing to me.

Malik Heath – Ole Miss ($4K) here’s another pass catcher that leads his team (tied with TE Michael Trigg – $3.4) in receptions and TDs for a bargain bin price. Especially with the level of competition increasing for Ole Miss, they’ll have to bring a more balanced offensive approach to this game which means more passing attempts. Even if Jaylon Robinson ($7.5K) is back, Heath could still earn his low salary and then some.

A.T. Perry – Wake Forest ($7.2K) This fade has a chance to make me look foolish but with so many attractive WRs that are less expensive, I find it hard to roster Perry. Other than the Vandy game this year, Perry has been quiet.