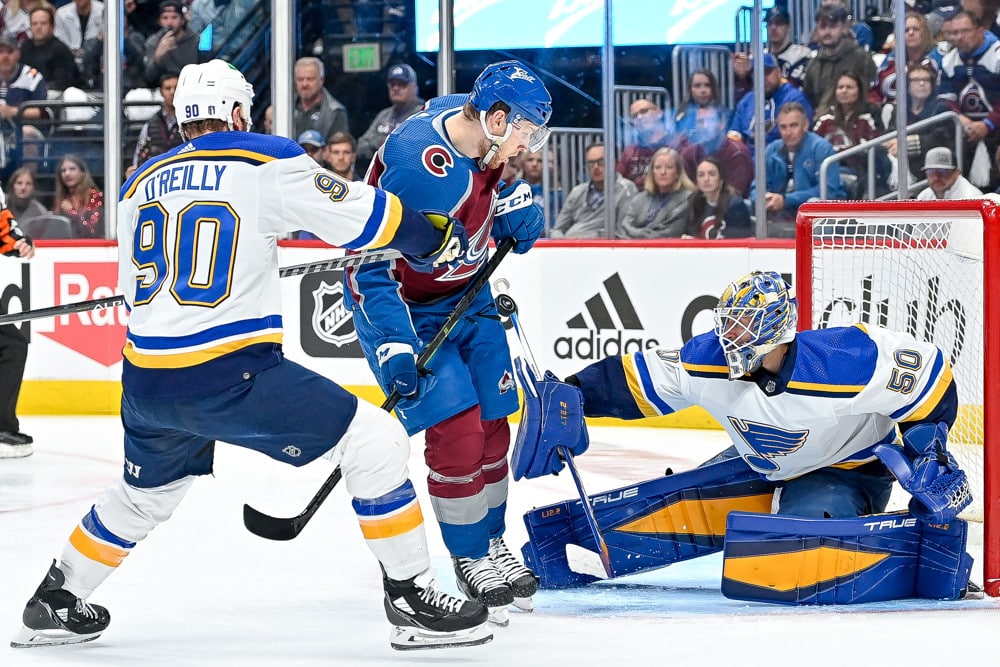 DENVER, CO – MAY 17: St. Louis Blues goaltender Jordan Binnington (50) and center Ryan O’Reilly (90) defend as Colorado Avalanche center Nathan MacKinnon (29) tries to score during game 1 of the second round of the Stanley Cup Playoffs between the NHL Central Division St. Louis Blues and the Colorado Avalanche at Ball Arena in Denver, Colorado on May 17, 2022. (Photo by Dustin Bradford/Icon Sportswire)

The 2022-23 NHL season is quickly approaching! The preseason is well underway and we’re less than two weeks from NHL opening night! We previewed the Atlantic Division on Monday, so we’re moving along to the Central Division here on Tuesday.

We’ll be going alphabetically with the Atlantic, Central, Metropolitan, and Pacific, allowing us to alternate between the East and West. For each division we’ll list the odds and give a favorite and longshot pick to win, then a few prop bets (to make/miss the playoffs, over/under points, etc.) at the end. Let’s continue with the NHL Central Division odds, picks, predictions, and best bets!

It’s rare that you’ll see a team actually favored to win a division in the NHL like this, but the Avalanche are that good… and the rest of the division may be that bad.

The Avalanche went wire-to-wire as the Stanley Cup favorites last season and they got the job done as they stopped the Tampa Bay Lightning dynasty in its tracks. Colorado only won the Central Division by six points over Minnesota, but the Avs haven’t lost too much while the teams around them took a bit of a step back.

Nazem Kadri is the Avalanche’s main departure, with Andre Burakovsky — who missed most of the playoffs — departing as well. However, they were able to lock up Valeri Nichushkin and their young defensemen are only getting better. On top of that, they’ll have a full season of a good role player in Artturi Lehkonen and added Evan Rodrigues as well.

Nathan MacKinnon and Cale Makar will continue to lead the way offensively and defensively, with Mikko Rantanen, Gabriel Landeskog, and the likes of Devon Toews and Bowen Byram helping out.

Below them, the Wild lost Kevin Fiala and Cam Talbot, while the Blues lost David Perron. The Avalanche may not get much better than -150 during the season given the hype around them.

I backed the Avalanche at -175 in our Central Division Betting Preview podcast, so -150 is even better.

The Blues easily cleared 96 points last season with a total of 109. They lost Perron, as mentioned above, as well as goalie Ville Husso, but they still have their core.

This team won the Stanley Cup just a few years ago and they still have a decent amount of that core: Ryan O’Reilly, Vladimir Tarasenko, Brayden Schenn, etc. Jordan Kyrou broke out a bit last season and should only continue that this year.

The defense leaves some room for improvement beyond Torey Krug, Justin Faulk, and Colton Parayko, and it will always come down to Jordan Binnington (and Thomas Greiss) in net.

Simply put, I don’t think the Blues are 14 points worse than they were last season. Five teams in this division finished with more than 96 points last year. The Blues will be one of those four or five again this year.

The Stars are bridging the gap between veterans like Tyler Seguin and Jamie Benn and youngsters like Roope Hintz and Jason Robertson.

One of their biggest young pieces is in between the pipes in the form of Jake Oettinger. The 23-year-old netminder showed what he can do in a seven-game playoff series, posting seven quality starts and a .954 SV%, allowing 13 goals on 285 shots.

Oettinger should continue to improve this season and you may be able to get this at a better price elsewhere.

Speaking of a better price, a better play for the Stars may be for them to win the Western Conference (+1800) or Stanley Cup (+4000) for a longshot sprinkle.

Alternatively, you could take either the Predators or Wild to miss the playoffs. The Wild are better positioned, however, so I’m going with a bit shorter odds at +170 with the Predators.

The Avalanche are going to make the playoffs. The Blues and Stars should as well, along with the Wild. That leaves the Predators as the odd team out.

Nashville overperformed last season with guys like Roman Josi, Matt Duchene, Ryan Johansen, and Filip Forsberg all playing up to their ceilings — if not above their ceilings.

The Preds faded down the stretch last season and only made the playoffs by three points despite holding strong for most of the year.