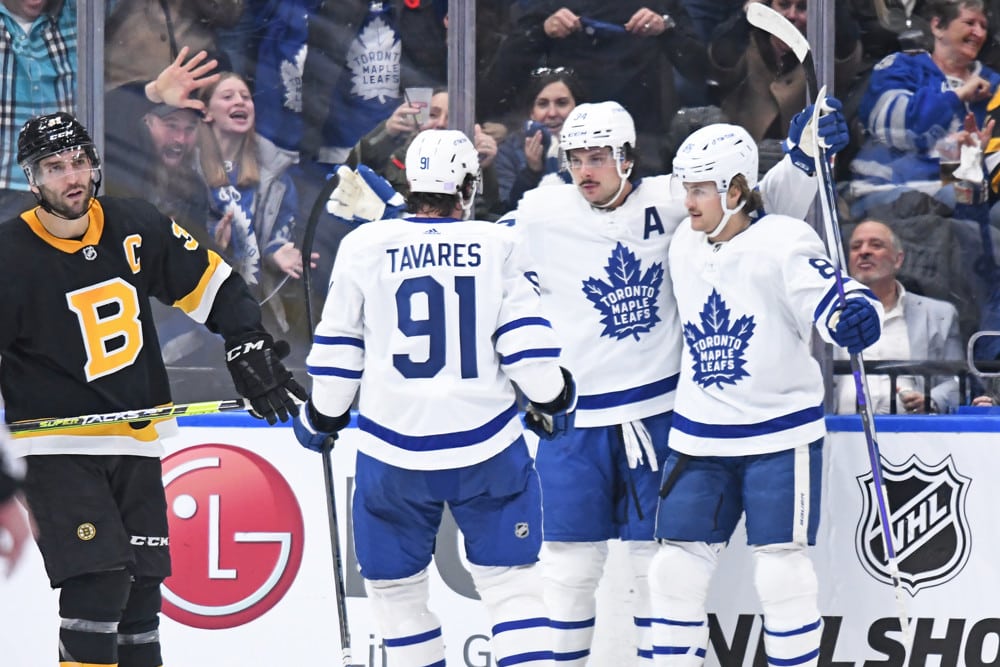 The 2022-23 NHL season is quickly approaching! Training camps are well underway and the puck dropped on preseason games over the weekend. With just a few weeks until NHL Opening Night, I wanted to look at the best bets to win each division and a few prop bets.

We’ll be going alphabetically with the Atlantic, Central, Metropolitan, and Pacific, allowing us to alternate between the East and West. For each division we’ll list the odds and give a favorite and longshot pick to win, then a few prop bets (to make/miss the playoffs, over/under points, etc.) the end. Let’s start with the NHL Atlantic Division odds, picks, predictions, and best bets!

The Leafs are the favorites to win the Atlantic Division and +170 isn’t a bad price at all.

Toronto didn’t see many key departures in the offseason besides goaltender Jack Campbell, who they replaced with a tandem of Matt Murray and Ilya Samsonov. Campbell was an All-Star goalie in the first half but struggled in the second.

While goaltending is an important position, the Leafs are hungrier than ever and have their big guns locked and loaded for this 2022-23 NHL season. They mostly had some depth departures that they were able to replace with relatively comparable players.

The one key thing in the Atlantic Division is that while the Leafs pretty much stayed the same, their main competition got worse.

The Panthers finished seven points ahead of the Leafs last season, but traded away both Jonathan Huberdeau and MacKenzie Weegar for Matthew Tkachuk. While Tkachuk may be on a similar level to Huberdeau, the loss of Weegar is key. On top of that, Florida did not retain trade deadline additions Ben Chiarot or Claude Giroux and also lost Mason Marchment.

The Lightning also lost some key pieces in Ondrej Palat and Ryan McDonagh. They brought in Ian Cole and Vladislav Namestnikov, but as a team they’re a year older and had another deep playoff run that could catch up with them. Besides, they finished five points behind the Leafs last season.

If you’re not too confident in Toronto and want a longshot, you could do a lot worse than the Senators at +2800.

The Senators arguably won the offseason with their additions of Alex DeBrincat, Claude Giroux, and Cam Talbot. They also have a good young core with Brady Tkachuk, Josh Norris, Drake Batherson, and Tim Stutzle rounding out the top-six. On the blue line, Thomas Chabot is becoming one of the best young defensemen in the game. Talbot is an upgrade from Matt Murray in crease as well.

It probably won’t happen as the +2800 odds imply only a 3.45% chance of happening, but I think they have at least a 10% chance to put it all together this season. Sprinkle a small play on this and maybe you can hedge it later in the season.

The Bruins have yet to fall off too much and despite rumors that Patrice Bergeron may retire, he’s back with the B’s — as is David Krejci, who played overseas last season. Now, the B’s will be Brad Marchand, Charlie McAvoy, and Matt Grzelcyk for a decent portion of the season, but they should be back by 2023 (if not sooner).

With the Panthers and Lightning both likely taking a step back, the Bruins should still maintain their pace with Taylor Hall as a good complementary piece. On top of that, they have two solid goalies in Jeremy Swayman and Linus Ullmark.

I’m grouping these together as they’re both longshots and more fun bets to sprinkle a bit on. I could see only one of the Florida teams making the playoffs this season and there is an outside chance that they both miss it.

The Panthers downgraded this offseason, as mentioned above, and the Lightning are wearing down as well.

I could see one of these teams missing the playoffs with Toronto and Boston taking the first two playoff spots in the Atlantic and the Senators making a push — Ottawa is only +200 to make the playoffs.