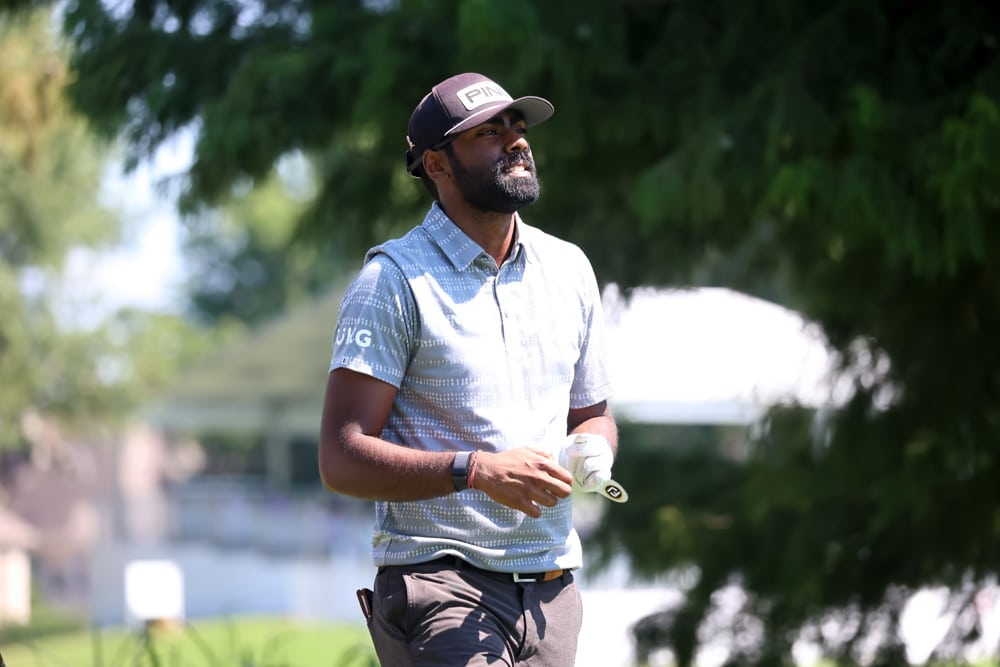 MEMPHIS, TN – AUGUST 12: Sahith Theegala during the second round of the FedEx St. Jude Championship on August 12, 2022 at TPC Southwind in Memphis, Tennessee. (Photo by Michael Wade/Icon Sportswire)

After a more competitive Presidents Cup than anticipated, the PGA Tour resumes its normal programming. Future stars try to climb their way up the FedEx Cup standings at the 2022 Sanderson Farms Championship at the Country Club of Jackson. As always, here is your early deep-dive on the 2022 Sanderson Farms Championship and a preview for how to bet. In addition, listen below to the Golf Gambling Podcast for more information about golf betting.

Headlining the field is Sam Burns. Burns is the defending champion of the Sanderson Farms Championship. Last week at the Presidents Cup, he played much better than his overall points total indicated. While he only earned 1 point across five matches, is playing partners in Scheffler and Horschel let him down. Overall, he played very well at Quail Hollow. He’ll look to repeat at the Sanderson like he did at the Valspar earlier this season.

Another notable in the field is Sahith Theegala. While he’s wildly inconsistent, he’s electric. This was his breakthrough event last season as he held the 54 hole lead. But a final round 71 left him three shots short of eventual winner Sam Burns. Theegala will be a popular pick to win this week. But he has the game to do it.

In 1914, a group of wealthy local businessmen helped fund and build the Country Club of Jackson (referred to as CC of Jackson for the remainder of the article). The country club was relocated in the 1960s, where it remains to this day.

The country club underwent a significant renovation in 2008 by John Fought. His vision was to reincorporate classic Donald Ross design features and restore the greens with new Bermuda turfgrass.  After the renovation, the club successfully lobbied the PGA Tour to move the Sanderson Farms Championship away from the Annandale Golf Club. The tournament came to its Dogwood and Azalea Championship Courses for the first time in 2015.

Some Donald Ross renovations are tremendously successful, such as the renovation of the Sedgefield Country Club for the Wyndham Championship. Some aren’t, like Rees Jones’ ruination of East Lake. Unfortunately for Fought, the land didn’t give him all that much to work with. But for what he had to work with, he did an acceptable job replicating a Donald Ross design:

Fought did a pretty good job with the hand he was dealt. One can definitely see classic Donald Ross principles in the golf course. The golf course has a classic out-to-in routing. It has a nice mix of left and right doglegs to force players to work the ball both ways. There is nice positioning and undulation of greens that will force players to hit the correct side of the fairway. The greenside bunkers also are pretty well done and are of the Donald Ross style. And there’s a good variety to the lengths of all the Par 3’s. You could lift up this piece of property and put it in the Northeast, and the routing and style would fit in with the numerous Donald Ross designs in that part of the country.

But unless Fought wanted to move a ton of dirt there isn’t a whole lot that could be done to the flat, swampy piece of property to make it more interesting. He did not try to force anything on the golf course and focused simply on creating a solid, no-nonsense track. Overall, this is a perfectly fine golf course for a fall event on the PGA Tour. But it’s certainly not one to attract eyeballs away from football this weekend.

First and foremost, there are very few reliable players in this field. Other than a handful of players, gamblers will be placing bets on highly volatile players. And considering we only have 2-4 rounds of Strokes Gained data on the recent Korn Ferry Graduates, we’re going to make some very bad assumptions based on what they did at the Fortinet. Tread carefully.

To start our analysis of the Sanderson Farms Championship, here’s some relevant facts and statistics about the CC of Jackson:

1. The golf course features bermudagrass fairways and 2″ bermuda/zoysia mixed rough. The greens are Champion bermudagrass. This is the same grass types as the greens at the following golf courses:

For those who want to really drill down on specific putting stats on this particular strain of bermuda, use these golf courses. Otherwise, just relying on bermuda in general is fine.

2. The CC Jackson plays about 7,460 yards and is a Par 72. However, per DataGolf the golf course plays only about 7,200 yards because much of the golf course can be shortened by tee shots over doglegs and bunkers. Using this metric, the CC of Jackson is about middle of the pack in relative length on the PGA Tour. It does feature some of the shorter Par 3’s on the PGA Tour. Most Donald Ross original and inspired designs typically feature one or two shorter Par 3’s to knock down the average yardage.

3. The CC of Jackson plays about 1.4 strokes under par on average. It’s one of the easier golf courses on the PGA Tour. Of all regular stops on the PGA Tour, the CC of Jackson feature the 7th easiest Par 4’s. The Par 5’s are about middle of the pack in terms of scoring, likely due to their above average length. Three of the four play over 580 yards. In addition, the field typically gains a little more strokes around the green and with the approach shots than they do on typical PGA Tour setups. They lose slightly off the tee and are almost exactly average for putting.

5. Despite the high missed fairway percentage, players pepper the greens at CC of Jackson to the tune of 73.1%. That’s one of the highest rates on the PGA Tour. As mentioned earlier, the approach shots are fairly easy at the golf course. Players typically gain more strokes on their approach shots than they do on the average PGA Tour setup.

6. Even the greenside bunkers don’t provide for much of a challenge. The CC of Jackson feature the easiest greenside bunkers to play from out of all the regular PGA Tour stops. And they’re the 3rd easiest of all golf courses the PGA Tour has played at since 2015.

7. If there is a defense of the golf course, it’s the greens. Players typically find less success on putts under 15 feet at the CC of Jackson than they do on the typical PGA Tour setup. This is likely attributed to the undulating nature of the Donald Ross-style greens, and the trickiness of putting on bermudagrass.

Next, here’s where players will hit their approach shots from:

Only three ranges feature above average approach shot distance rates – between 100-150 yards, and 250+ yards. The 3 shots per round from 250+ are likely on the Par 5 3rd, 5th and 14th. Focusing on Par 5 scoring instead of proximity takes care of your analysis for these shots. As such, all your focus on proximity and relative to par scoring on approach shots should probably focus on 100-175 yards.

Next, here’s the relative skillset chart of who typically excels at the CC of Jackson. This is a good preview of what types of golfers to target for bets this week: 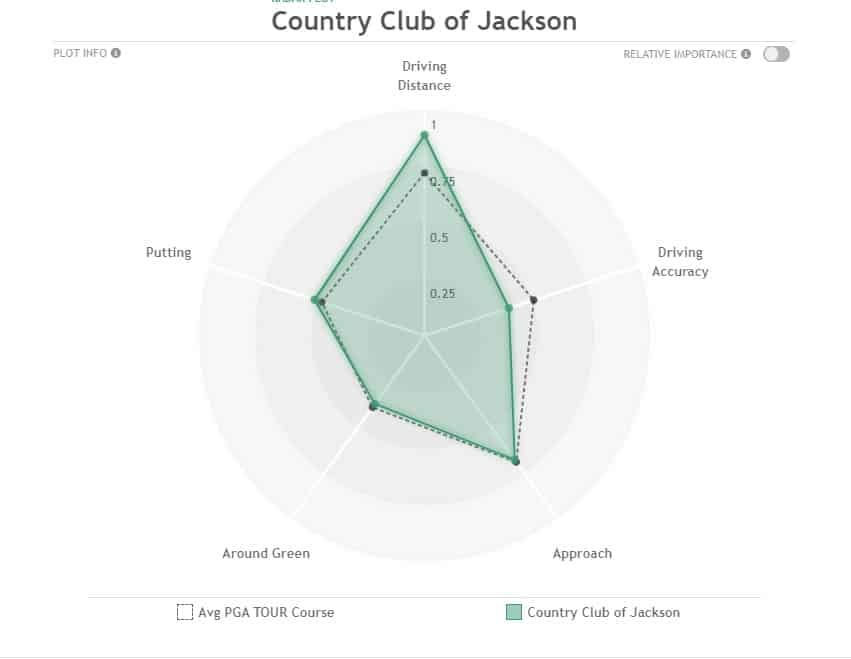 Based on the golf course facts above, this skillset makes a ton of sense. Anyone who can cut the doglegs to shorten up the golf course leaves them with much shorter approach shots. That’s why longer hitters typically have an advantage at the CC of Jackson. While approach play is always important, it’s not quite as important this week as the approach shots are typically pretty benign. And better putters, particularly on bermuda, have an edge at the CC of Jackson. Easier approach shots likely mean shorter putts for birdie. And as shown above, the greens are tougher to putt on than normal PGA Tour setups. Confidence putting on these type of surfaces is a big plus.

Follow the tips in this preview, and you should put together a successful betting card for the 2022 Sanderson Farms Championship.

We are hiring Golf Writers at the Sports Gambling Podcast! Click here to apply to be our newest editorial creator for golf content!